Augusta stunner: DJ withdraws from Masters with back injury 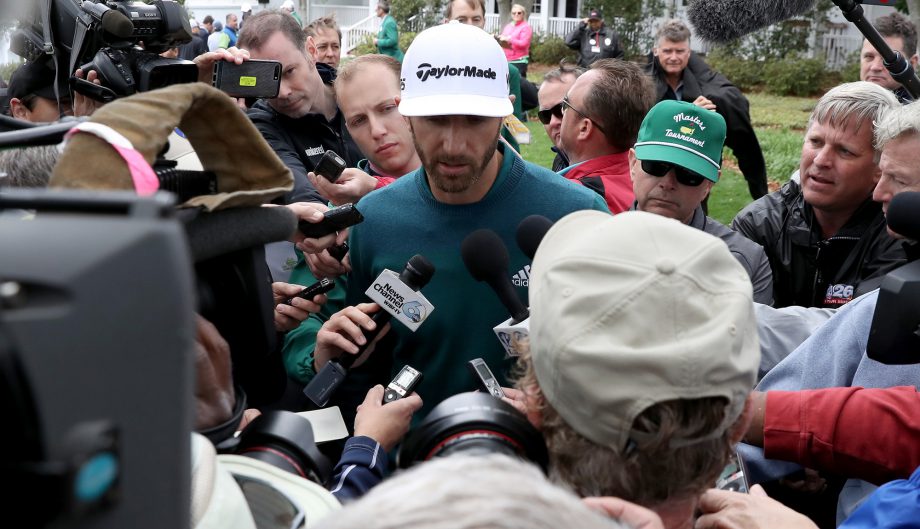 AUGUSTA, Ga. – Dustin Johnson arrived at Augusta National on quite a roll, having won his last three tournaments.

He never even took a shot at the first major of the year.

The world’s No. 1-ranked player was forced to withdraw from the Masters on Thursday because of a lower back injury suffered less than 24 hours earlier in a freak fall at the home he was renting for the week.

He certainly tried, arriving at the club about two hours before he was scheduled to tee off in the final group of the opening round with two-time Masters champion Bubba Watson and PGA Championship winner Jimmy Walker.

Johnson took some easy swings on the practice range, headed back inside for additional treatment, and then broke out his longer irons and the driver to see how the back reacted.

He was clearly in pain, rubbing the area several times and letting his caddie tee up the ball so he didn’t have bend over. After an extended conversation with his coach, Butch Harmon, Johnson started walking toward the first tee.

His intention was to play.

His back wouldn’t let him.

“It sucks,” Johnson said. “I’m playing the best golf of my career. This is one of my favourite tournaments of the year. Then a freak accident happened (Wednesday) when I got back from the course. It sucks. It sucks really bad.”

Johnson got as far as the putting green between the clubhouse and the first tee. After about a half-dozen putts, he pulled out an iron and took a few more half-hearted practice swings.

Walker and Watson headed toward the tee.

Johnson went the opposite way.

“I was doing everything I could to try to play,” he said. “Last night, it was ice, heat, ice. I was up pretty much all night trying to get it ready for today. I had it worked on all morning. Obviously, I can make some swings. But I can’t make my normal swing.”

This Masters was over for Johnson before it even began, a stunning development that removed the favourite for the green jacket .

“It’s disappointing, for sure, for everybody,” 2013 champion Adam Scott said. “To pull out of the Masters when you’re in the kind of form he’s in, it must be a very difficult decision to make. Hopefully he gets better quick.”

Two-time major champion Jordan Spieth realized Johnson was out of the tournament when his name was removed from the scoreboard.

“As a friend of his and somebody who’s played a lot of golf with him, I know this: It must really, really not be good in order for him not to tee it up,” Spieth said.

The injury occurred Wednesday after Johnson returned to his rental home from a morning practice session at Augusta National. On the way outside to move his car, and wearing socks but no shoes, he slipped on a short staircase.

“It would have been better if it was full set of stairs. I would have slid all the way down,” Johnson said. “But there were only three steps. I landed on my left side. My left elbow is sore and bruised. My lower left back took the brunt of it.”

He doesn’t think the injury is serious.

In fact, if it had happened earlier in the week, he probably would’ve been able to play.

“I feel like in two days, I’ll be fine,” Johnson said.

He had been scheduled to attend the Golf Writers Association of America annual dinner Wednesday night to accept its award as male player of the year. Johnson was coming off a season in which he captured his first major at the U.S. Open , was voted PGA Tour player of the year for the first time, won the PGA Tour money title and captured the Vardon Trophy for the lowest adjusted scoring average.

Freak injuries are not unprecedented in golf.

Two years ago, Rory McIlroy was playing soccer when he ruptured ligaments in his ankle a few weeks before he was to defend his title in the British Open at St. Andrews as the No. 1 player in the world.

Johnson missed the 2012 Masters, withdrawing two days before the start of the tournament, saying he had tweaked his back from pulling a jet ski out of the water. Golf.com cited an unnamed source two years later as saying Johnson had been suspended for a positive cocaine test. His management denied that he had been suspended.

Since then, Johnson had gotten his life and his game in order.

The 32-year-old American rose to No. 1 in the world rankings and became the first player in more than 40 years to enter the Masters on a three-tournament winning streak. Two of those titles were World Golf Championships, and his undefeated week at the Match Play made him the first player to capture all four of the WGCs.

Johnson headed into the first major of 2017 accompanied by as much hype as perhaps anyone since Tiger Woods in his prime – “a freak of nature,” in the words of Rickie Fowler.

“I’ve got a lot of confidence in my game right now, especially with the way I’ve been playing the last few tournaments,” Johnson said Tuesday. “But, you know, anything can happen.”

Just not what anyone expected.