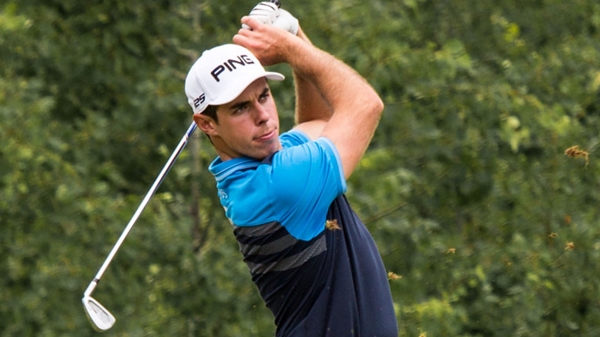 OTTAWA, Ont. – With a closing birdie at his final hole of the day, Leicester, England’s Greg Eason fired a 5-under 66 on Friday at Hylands Golf Club to take a one shot lead through 36 holes at the Forces and Families Open.

The 22-year old rookie sits at 13-under par through two rounds and leads by one over North Vancouver’s Eugene Wong, who fired a 10-under 61 on Friday, a new career best as a professional.

“I managed to make a few putts and scramble the best I possible could out of it,” said Eason, who led after Thursday’s first round following an 8-under 63. “I stayed patient and then luckily had a nice finish.”

Eason briefly opened up a three stroke advantage, playing his first 12 holes in 5-under par before a pair of bogeys dropped him behind Wong, who birdied his final two holes to card the new course record at Hylands’ North Course. Eason would respond with birdies on two of his final three holes, including an approach from 107 yards to three feet at the par-4 9th, his final hole of the day, to take top spot heading into the weekend.

“I played the hole before that terribly, so it was nice to scrape a par out of it and then put a shot close on the last too,” said Eason, who salvaged a par on the eighth thanks to a tricky up-and-down.

The 2014 All-American at the University of Central Florida will be in familiar territory heading into the third round with the lead, having shared top spot through 36 holes three weeks ago at the Staal Foundation Open presented by Tbaytel in Thunder Bay. Eason said the experience of being in contention he gained there will be invaluable, especially as a first year professional.

“The week [in Thunder Bay] really helped me for this week to put myself in a similar situation and to hopefully try and get a similar, if not better result,” said Eason. “It’s given me a lot of confidence for sure, playing in front of that many people and handling the different emotions there are, with the ups and downs and the journey that you’re going through in the round.”

Two shots behind Wong was Ponte Vedra Beach, Florida’s Jeff Dennis, who birdied his final hole of the day to hold solo third place at 10-under heading into the weekend.

A hot putter and a strong finish helped Eugene Wong to the best round of his career on Friday, adding another notable point to his already-strong resume. The 23-year old stuck a wedge at his final hole of the day to four feet and made the putt for a 10-under 61, the new record at Hylands Golf Club’s North Course.

“It’s probably the best I’ve ever putted. I just made everything that I saw on my line,” said Wong, a two-time All-American and the 2010 Jack Nicklaus Award winner at the University of Oregon and twice a winner on PGA Tour Canada. “I knew had to birdie to shoot 10-under, but I wasn’t really thinking about that. I was just thinking ‘Hit a good shot,’ and I hit a great one.”

Wong, who currently sits ninth on the Order of Merit, will be looking to add to his two wins in 2012, coming at The Great Waterway Classic and the TOUR Championship of Canada.