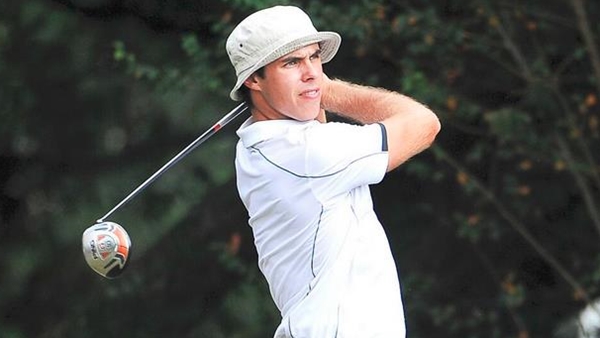 BEAUMONT, Calif. – England’s Greg Eason carded a bogey-free round of 6-under 66 at Oak Valley Golf Club on Wednesday to take the lead by one at PGA Tour Canada’s California Qualifying Tournament.

The 21-year old University of Central Florida student, playing as an amateur this week, made six birdies to take a one stroke advantage over France’s Alexis Anghert and Peter Campbell of California with two rounds to go. Thirty-three players are under par through two rounds of the 72-hole competition that will see 18 players earn exempt status on PGA TOUR Canada for 2014, with the rest of the top 40 plus ties earning conditional status.

Eason, who has seven individual collegiate wins at the University of Central Florida – including one this past weekend at the 3M Augusta Invitational – is looking to wrap up his NCAA career later this year, but not before attempting to secure status on PGA Tour Canada. Players can compete in Qualifying School as amateurs and defer joining as members until they turn professional.

“I didn’t know what to expect. I haven’t been to Tour School or anything like that before, so I’ve just tried to take it as it comes,” said Eason. “I’ve played some smart golf and luckily holed a few putts, so it’s mostly gone all right so far.”

Eason is looking to follow the footsteps of Josh Anderson in 2013 and Nate McCoy in 2012 as amateurs to earn status on PGA Tour Canada through Q-School, and said he’s looking forward to completing his last few weeks in college before taking on the professional ranks.

“I’ve still got finals in three weeks’ time,” said Eason.  “And then, conference championships and [NCAA] Regionals and Nationals, so there are a still a few weeks left. This Tour is a stepping stone Tour for the Web.com Tour, so hopefully this will be a nice step to go do something for the summer and see where this leads to. This is a lovely position to be in.”

One shot behind Eason are Anghert, the first round leader, and Campbell at 8-under. A group of three players – Charlie Winegardner, Clayton Rask and Seth Fair – are a shot further behind at 7-under. Hamilton, Ont.’s Justin Kim remained the low Canadian at 3-under after carding a 72, tied for 18th place.