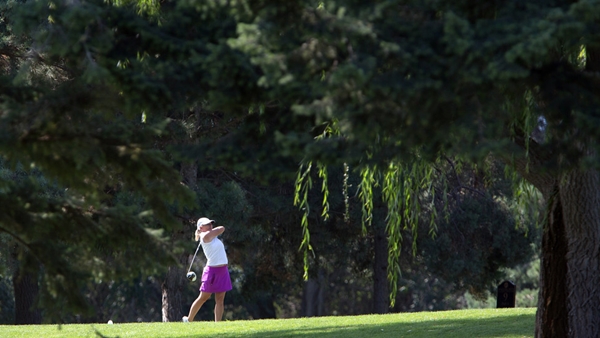 With two new courses opening this summer, as well as, the returns of the popular Web.com Tour Nova Scotia Open and the RBC Canada Cup to Halifax and the captivating PGA Tour Canada Cape Breton Celtic Classic, Nova Scotia seems like the perfect destination to tee up a golf vacation – and let’s not forget to raise a toast to Fortress Rum, which is now being aged in oak barrels at the Fortress of Louisbourg!

We probably could have waited until this summer for a family golf vacation to Canada’s East Coast, but as we packed the Toyota Highlander to the roof with three sets of golf clubs, baseball gloves, a football and bathing suits last August – Jenifer, Jacob and I knew our 12-night family escape would feel like a whirlwind adventure.

Our first stop was a friend’s home 15 minutes outside Fredericton and that’s where the golfing adventure began. Not sure why we had never played golf in a provincial park, but that’s where we headed – to Mactaquac Provincial Park Golf Course – a wonderful, par-72 from the blue tees, forested routing that stretches to 7,030 yards. We chose the whites at 6,430 yards. Surrounded by Mother Nature, the 18-hole layout is truly a beautiful walk in the park. Surprisingly, it was one of the top-two conditioned courses we played throughout the journey and for rates under $50 (depending on the time of day), the value is excellent. I’ll go back to try and break 80 after posting an 85 in that first encounter. The course, you’ll also want to play when passing through Fredericton is Kingswood, which has its own 7,000-yard routing designed by Graham Cooke, as well as, an award-winning nine-hole, par-3 course that’s entertaining for all – especially kids learning the game and don’t forget to drop by the 80,000 square-foot family entertainment center.

Our next stop took us to Fundy National Park Golf Course – a Stanley Thompson creation that has been on my bucket list for a couple of decades after playing his natural wonders at national parks in Banff, Jasper and Cape Breton. I know, it’s just nine holes, the yardage signs are in metres (and yards) and Parks Canada has paid little attention to it over the years, but for less than $20, Fundy National remains a gem and truly a special place for anyone who appreciates Thompson’s legacy across Canada; every hole is unique. It’s only 3,069 yards from the tips, but nearly a year later, I can still walk through all 41 shots I took that sunny morning. The original clubhouse overlooking nine green is padlocked shut, the bunkers are on the neglected side and the greens are shrinking, but the views from the tees are stunning and you can only wonder what would have been if they had let Thompson build the second nine he had designed. Away from the golf course, the park is filled with natural wonders and magnificent hiking trails, the highest tide changes in the world and an enlightening Dark Sky Preserve with millions of stars visible to the naked eye.

For our last round of golf in New Brunswick, we headed off to the four-diamond Algonquin Resort at St. Andrew’s-by-the-Sea for two awesome nights following its $50 million renovation. With 125 years of history behind it, The Algonquin is easily one of the country’s signature hotels and its hospitable ambiance is magical. Whether taking a complimentary bike for a stroll into town and down to the local wharf to see the community of fishing boats, dropping by the local farmer’s market, enjoying an evening campfire with loaner guitars, building sand castles at the beach at Katy’s Cove overlooking Passamaquoddy Bay or sliding down the indoor pool slide – the Algonquin is a delightful destination unto itself.

Its neighbouring golf course – that goes by the same name – is a solid Tom McBroom design with some strong holes alongside the bay, but its fairway conditioning left something to be desired last summer; hopefully it will make a strong comeback for 2015 because it is worthy of a visit even at the full price of $85.

From New Brunswick, we popped across the Bay of Fundy to Digby, Nova Scotia for the second half of our journey via a foggy ferry ride. Digby is a quaint seaside town known as the home for giant scallops and another Thompson design at Digby Pines Golf Resort and Spa. We didn’t stay at the resort because it was sold out, but there are a couple of smaller establishments in town that will do the trick for a night or two. For a course that measures less than 6,300 yards, the Pines has all the highlights of an original Thompson masterpiece with naturally rolling fairways, great views off the tees (especially on the par-3s), some wonderfully intricate greenside bunkering and a remarkable – and perhaps reachable – 278-yard par-4 that plays uphill to a green that’s protected by a bunker in the shape of a question mark. The only question is, are you willing to go for it? It is $73 full rate, but two can play with cart at twilight for $88 and that’s a steal.

From Digby, we headed to the South Shore for a couple of nights at White Point Beach Resort, which dates back to 1928 with a rugged nine-hole layout designed by none other than Donald Ross. It’s a struggling community golf course at its heart and remains partnered with the resort, although they don’t get a ton of tourist traffic – which is too bad. It’s a wonderful, timeless layout bordering the ocean and overlooking the one-kilometer white beach that leads to the resort’s main lodge – it really does feel like time has stood still for decades as you gaze out towards the Atlantic Ocean.

The iconic and historic resort that had been recently renewed after a major fire gutted the main lodge in 2011, reminded us of the cozy, comfort of Tigh Na Mara Seaside Spa Resort on Vancouver Island. Recreation is the name of the game here; although quite a few patrons donned wet suits to go surfing in the frigid waters, we regrettably passed on that. We opted for kayaking, the swimming pool, a games room and some awesome seafood in the main restaurant.

For our final round, we headed up to Bridgewater, an inland community not too far from historic towns like Peggy’s Cove and Lunenburg, where the Bluenose II makes port. Here we found Osprey Ridge Golf Club, another intriguing Graham Cooke that seems to fly under the radar for some reason, but not sure why. While it would be a heck of a walk, especially on the back nine, what you’ll remember is a solid 6,600-yard course that is very playable from four sets of tees. There’s water on more than half the holes, lots of bunkers and the two finishing holes for each nine climb steadily uphill back to the clubhouse. For $32 to $53 dollars depending on the time of day, it was easily the best conditioned and best valued course we played!

As we drove through Halifax and started to the return journey, we made a brief stop at The Links of Brunello for a quick peak at the new Tom McBroom design that’s opening on June 15, 2015 and it looked amazing. The other new course opening in July is Cabot Cliffs, the sister course to Cabot Links. Both courses have captured the fancy of golfers around the world as the little town of Inverness is transformed into a mini Bandon Dunes. They are certainly the talk of Canadian golf and are about to take the world stage – it’s hard to imagine a better one-two punch!

A little quick math tells me I have now played 15 courses in Nova Scotia, eight in New Brunswick and another 10 on Prince Edward Island, but with two more now on my bucket list, it’s going to be difficult to resist the temptation of returning once again this summer for some great golf and a taste of that Fortress Rum.

Websites worth checking out: