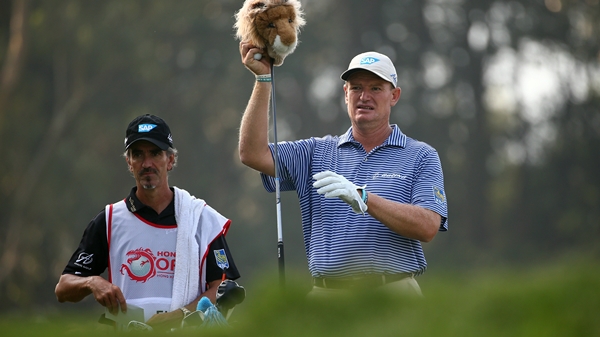 HONG KONG – Ernie Els grabbed control of the Hong Kong Open with a two-stroke lead at the halfway mark by carding a 5-under-par 65 on his birthday Friday.

Els, who turned 45, has a 9-under total of 131 to lead Raphael Jacquelin of France and Australians Scott Hend and Cameron Smith by two shots on the Fanling Course at Hong Kong Golf Club.

One shot further behind was a group of 11 players, including first-round leader Jyoti Randhawa of India.

“The course is there for the taking. I feel I can win this,” said Els, in the midst of his first Hong Kong Open. The four-time major winner is going for his first win of the year.

He began the second round two shots behind Randhawa in second place, and was soon into his stride, knocking in five birdies on his opening nine holes. He reached 10 under before attempting an ambitious drive for the green at the tricky 288-yard, par-4 fourth hole, only to find himself in the rough. It ended in his solitary bogey in the round.

“The fourth hole was a bit of a bummer, I didn’t really have to go for it (the green), and I lost some momentum there,” Els said. “I had it really going and it could have been really low.”

Defending champion Miguel Angel Jimenez, dealing with food poisoning, missed the cut by three shots. He made a par-70 to total 2-over 142.

Jimenez was bidding to become the first player to win the Hong Kong Open five times as well as complete a hat trick.

“It is disappointing that I couldn’t do it. But I was still not fit and it was hard out there,” the Spaniard said.

Also missing the cut was Nicolas Colsaerts, whose second round of 79 included two double bogeys and eight bogeys.