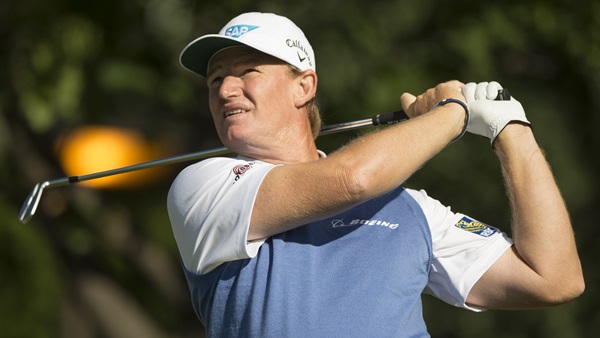 SUN CITY, South Africa – Ernie Els is considering cutting his golf schedule even more to spend time with his family, saying life on the road after 25 seasons as a pro is getting “tougher and tougher.”

The four-time major winner has already slowed down over the past few years, playing 19 tournaments on the PGA Tour and only seven European Tour events last season.

The 44-year-old Els expects to trim that again, he said at the Nedbank Golf Challenge, his first tournament in a month.

The South African, who turned professional in 1989, said that with his daughter Samantha now 14 and son Ben now 11 “there are other things that come into play.”

“It’s always been difficult leaving the house, but now you really see your kids growing up and it gets more difficult,” Els said.

He almost skipped the Nedbank to stay on vacation with his family, and had to send Samantha back home to Florida on her own for school while he set off in search of a fourth title at Sun City.

“I feel a little bit guilty about that,” he said.

Els is recognizing the trend with a couple of other players on tour.

“Family life is important and you don’t want to miss out on their best years before they leave the house,” he said. “A lot of us are in that boat now. Phil (Mickelson) has kids the same age as mine, so does (Steve) Stricker. Guys get to my age and your kids get to teenage years and it becomes a bit of a difficult scenario. It’s getting tougher and tougher. The younger guys don’t have too many hassles traveling … but things change.

“I haven’t really got a game plan for next year yet, but I definitely have to play a slightly different schedule. I’ve got to look at my schedule and see where I’m going to.”

One thing that will remain is his commitment to trying to win another major – maybe two. His British Open title in 2012, a decade after his first Claret Jug, bolstered Els’ hopes of another big win before he eases off completely.

“I’m 44 and with the equipment I can really stay with the longer hitters,” Els said. “I feel I have a chance. I just need to sharpen up some things, get the right venue and get the right mojo. Then I think we can pull something off again. It’s not going to be easy, but I believe there are one or two left, so I’ll keep searching.”