Els rattled after hitting spectator with drive; opens with a 79 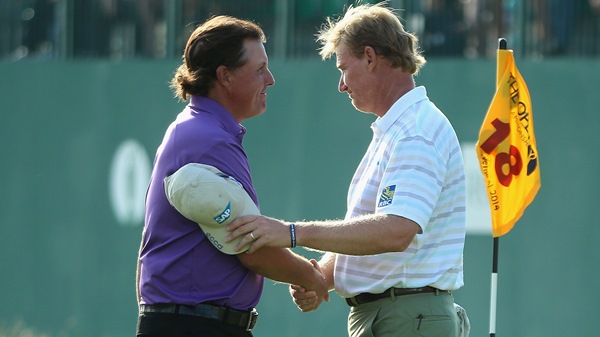 HOYLAKE, England – Ernie Els hit a spectator in the face with his opening tee shot at the British Open on Thursday, shaking up the two-time champion for the rest of his first round at Royal Liverpool.

The man’s injury and Els’ subsequent triple-bogey 7 on the first hole were just the start of his problems. The Big Easy will have a big task trying to stick around for the weekend after carding a 7-over 79, including 42 on the front nine.

Els said he was “quite rattled” after he realized the man, who he estimated was in his 60s, was bleeding profusely from a shot that Els said hit the spectator directly in the face.

“There was blood everywhere,” Els said. “It was like a bullet coming at him. I obviously felt pretty bad about it. It wasn’t nice. I was trying to hit it left, and should have told the starters to move the people back on the left side, but I didn’t do that.”

Els said he would make inquiries about the man’s recovery. Tournament officials said the spectator was not seriously injured.

On the first green, Els missed a bogey putt from about eight inches, bizarrely backhanded the subsequent foot-long putt just past the hole and tapped in for his triple bogey.

“Yeah, I was kind of finished. I started to miss short putts, it was just a nightmare,” he said.

Els said he may have “put the jinx” on his playing partners – defending champion Phil Mickelson shot 74, and Masters winner Bubba Watson had a 76.

Watson said he felt Els was affected by the man’s injury.

“When we got to the green Ernie said he hit somebody right in the jaw and he said it wasn’t good,” Watson said. “And you could tell Ernie was shaken up by it. You’re not trying to hit a bad shot in, but when you hit somebody like that it’s not a good scene, and it’s very heart-breaking. I’m not saying that’s why he struggled on that hole, but I’m pretty sure that’s what it was.”

There was a bit of comic relief on the 18th where Els had to gently prod a frog away from the tee box with his driver, prompting a smile.

Els won his British Open titles 10 years apart – at Muirfield in 2002 and at Royal Lytham in 2012. He also has two U.S. Open trophies. He’s playing his 24th British Open, where he has seven top-five finishes, and has missed the cut just three times.

That total could well be four after Friday.

“I played the front nine in 7-over par, (on) a perfect day, and that’s just unheard of,” Els said. “Hopefully we’ll get it tomorrow.”