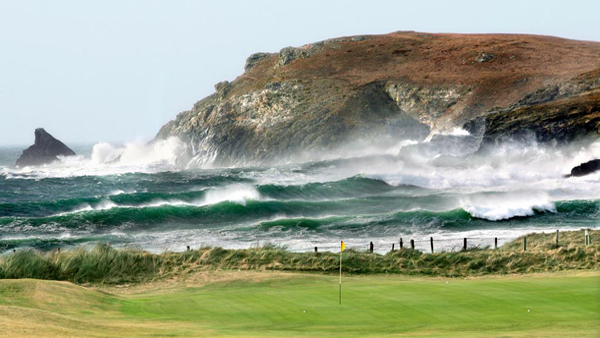 My friend Clive Agran, a fellow golf travel writer who lives in East Sussex, England, prefers to put his own unique spin on things. When Clive first told me about the Atlantic Links, a brilliant collection of ancient courses scattered along the coasts of Devon and Cornwall, I was keen to pack my clubs. While Clive undertook his Atlantic adventure by bicycling from course to course on two wheels (approximately 525km), I don’t necessarily recommend his method of transportation. I do strongly suggest that you put the Atlantic Links on your hit list. The courses are grand, the scenery sublime and there are plenty of other temptations along the way, including Devon cream teas, Cornish pasties and some remarkable villages and gardens.

Burnham & Barrow An easy half-hour drive from Bristol is Burnham & Berrow Golf Club, originally laid out by Herbert Fowler with more recent tinkerings by Harry Colt and Alister MacKenzie. Dune-lined fairways heave and ho like the sea beyond and a few marsh holes create a memorable first impression. Number 10 requires a blind drive over a hill through a couple of striped goalposts. The 18th finale is a longish sweeping dogleg to a green surrounded by four daunting bunkers. The welcoming clubhouse serves terrific Thai fishcakes. England’s former reputation for bad food is long gone and West Country cuisine, we soon discovered, is worth the trip for its own sake.

St. Ednoc We bade farewell to Devon and crossed into Cornwall. In the small hamlet of Rock, where the likes of Prince Andrew come to play and party, we found St. Enodoc Golf Club, designed in the early 1900s by James Braid. You can play 36 holes here, but if time is short, the fabled Church course is your best bet for a memorable 18. The quality of the links and the incomparable views of the nearby town of Padstow and the Camel Estuary make for an enchanting round. The first three holes are blind and there are plentiful oddities and obstacles, plus lots of walkers with their dogs, simply enjoying the stunning scenery. Number six boasts the Himalayas Bunker, reputedly the highest in Europe. Don’t miss a small detour to the 13th-century chapel tucked behind the tenth green. At this point, you might feel the need for a bit of divine intervention. The gravestone of Poet Laureate Sir John Betjeman, who penned beguiling verses about his beloved game of golf, is buried beside his favourite course. Recently, St Enodoc’s Church Course was included in Golf Digest’s inaugural ranking of the “World’s 100 Greatest Golf Courses,” proving that shorter and quirkier (it’s a par-69 and just 6,557 from the tips) can be sweeter. After our round we took a quick ferry over to Padstow, a harbour town the locals have nicknamed “Padstein” because British restaurateur Rick Stein has opened several eateries here. For a splurge, book a table at his Seafood Restaurant. Or, go local with an award-winning Cornish pasty from Chough Bakery.

Royal North Devon Wild and windswept Royal North Devon, also known as Westward Ho! is England’s oldest course, dating back to 1864. Originally laid out by Old Tom Morris, not much has changed today except the sheep are fatter. This is common land where the livestock get lifetime memberships. Hole number one resembles a petting zoo. You’ll have to let it rip to clear the massive Cape bunker on number four and don’t let that pesky creek on 18 ruin your score. Be sure to have a “cuppa” in the atmospheric clubhouse filled with antique golf memorabilia, mashies and featheries. Royal North Devon was the first club in England to have the title “Royal” conferred upon it by the Prince of Wales in 1866; it also became the first true ladies’ golf club in the world in 1868.

Saunton We could have saved time by taking the M5 highway to our evening destination, Saunton Sands in Devon. Instead, we took the coastal route past idyllic villages and patchwork fields of green and gold. Often the roads were barely wide enough for Clive’s bicycle, let alone four wheels. We arrived at the white art deco Saunton Sands Hotel, with commanding views of a long golden strand, in time for an alfresco dinner of lamb Provençal and strawberries topped with Devon’s decadent clotted cream. We were booked to play the Saunton East and West courses the following day. North Americans accustomed to using carts (or buggies as they are called in the U.K.) should take note that these courses were meant to be walked. Make sure you have comfortable shoes and be prepared to shoulder your bag or haul a trolley up and over the dunes. Some clubs rent battery-operated trollies, which I highly recommend, especially if you’re tackling 36 holes in a day. We played the East course, built circa 1897, with members Danny and Ann Wallace. Here, as at all the other clubhouses, we were struck by the warm welcome we received and the pride local members take in their clubs’ pedigrees. Sir Nick Faldo once remarked that Saunton East was “the finest course never to hold an Open.” So lofty are the dunes, it feels like each fairway is your private playground. The East may be lovely, but it’s no walk in the park. Eight par-fours exceed 400 yards and the par-threes demand accuracy. The West layout is shorter and a bit easier, but still a worthy challenge for any golfer. Dinner at Squires in nearby Braunton lived up to its reputation for serving the best fish and chips in North Devon. How they get such a light crispy batter remains chef Mike’s secret.

Trevose Our last round on The Atlantic Links was at Trevose, located high on a promontory overlooking Constantine Bay. We stayed comfortably in a self-catering cottage nestled just a pitching wedge away from the first elevated tees of the impressive Championship Course. We won’t forget the par-five fourth where the sea froths and crashes against the headland. This masterpiece, another by Harry Colt circa 1925, requires every club in your bag and the ever-present wind is a significant factor. Trevose’s Constantine restaurant, with its sensational sunset views and heavenly local scallops, made the ideal grand finale to our Atlantic Links romp — and a fitting place to toast “cyclopath Clive” for introducing us to this splendid collection of venerable links and some of the best scenery and hospitality to be found in England.