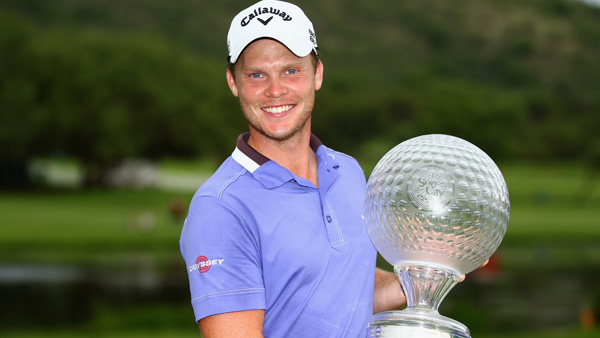 SUN CITY, South Africa — Danny Willett spoiled Luke Donald’s birthday with a final-round 66 to charge past his English compatriot and win the Nedbank Golf Challenge at Sun City by four shots on Sunday.

Willett claimed his second European Tour title ahead of Ross Fisher (68), while overnight leader Donald slipped to third in an all-English top three.

Willett had an impressive amateur career but had won just once on the tour – at the BMW International Open in 2012 – before his $1.25 million payday at the first event of the 2015 European season. The 27-year-old Willett made six birdies and no bogeys on the final day to finish with rounds of 65 and 66 over the weekend for an 18-under-par total of 270 at Gary Player Country Club.

The former top-ranked Donald, seeking a first title in more than a year, couldn’t quite celebrate his 37th birthday in style and ended with a 73 with four bogeys. He was six shots behind Willett.

Willett trailed Donald by one heading into the final round, but had overtaken his compatriot by No. 5, when Donald made his second bogey of the round after a wayward tee shot. Willett pounced with his third of six birdies on Sunday to move ahead and he led to the end.

Willett’s chasers had a glimpse of hope when he missed the green at No. 14, leaving himself with a tricky chip over a bunker back to the hole. But the former top-ranked European amateur recovered so well he still made birdie, and Fisher and Donald saw their hopes slip away. Willett entered the tournament as the No. 82-ranked player, but shoots to the top of the new European Order of Merit standings.

Behind Donald, Germany’s Marcel Siem was alone in fourth on 9 under, Thailand’s Kiradech Aphibarnrat was fifth and Spanish veteran Miguel Angel Jimenez completed a solid weekend with back-to-back 69s for sixth.