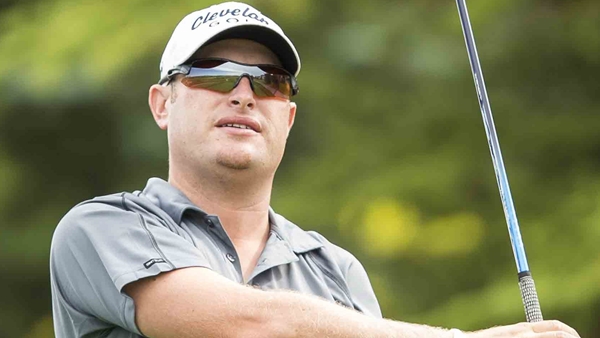 Day carded a 10-under 62, tied for the low round of the day, while Barnes birdied his final four holes of the day to shoot 63, with both players ending the day at 11-under through two rounds. The duo led by two over first round leader Drew Stoltz and Michigan’s Matt Harmon.

Day’s position is remarkable given his rough start yesterday, when he was 4-over for his first 12 holes. Since then, he’s carded 15 birdies and no bogeys to vault up the leaderboard.

“I’m pretty happy considering where I was yesterday. I’ve had a pretty good charge coming back,” said Day, who hails originally from Surrey, England but now calls Charlotte, North Carolina home. His 62 was tied for the low round of the day with Tulsa, Oklahoma’s Stephen Carney, and was one shot off the course and tournament record held by California’s Cody Slover.

Barnes, meanwhile, finished with a flash, carding birdies on his final four holes to tie Day at the top. The 26-year old said nearly everything went right for him on Friday, with all facets of his game clicking.

“I hit it really good and I putted good,” said Barnes. “I would have been really hard for me to screw it up because I just kept hitting it where I was looking, and every time I looked up, the putts were going where I was looking.”

First round leader Stoltz of Little Rock, Arkansas was unable to summon the magic that led to his brilliant 63 on day one, holding in with an even par 72 on Friday. Still, Stoltz was optimistic about his chances heading into the weekend just two off the lead.

“Hopefully today is my bad day, but you don’t win it on Friday,” said Stoltz. “I’m only two back heading into the weekend and two good rounds away from doing what I want to do.”