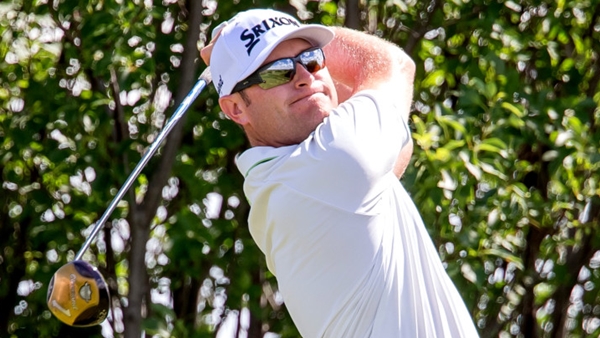 (Winnipeg) – Cape Coral, Florida’s Erik Barnes carded an 8-under 63 at Pine Ridge Golf Club in Winnipeg Thursday to take a one-stroke lead after 18 holes at The Players Cup.

The 26-year old put an exclamation point on his round, knocking his approach to four feet on the 18th hole and converting the birdie to lead by one over fellow playing partner Josh Creel. Barnes is looking to continue his solid play from last week, when he finished fourth last week at the SIGA Dakota Dunes Open presented by SaskTel.

“I’m playing well right now. It seems like the ball just wants to find the hole for me,” said Barnes. “Obviously it wasn’t the easiest conditions today and me and Creel just kind of kept feeding off of each other and kept making birdies. We both knocked some putts in and the next thing you know we played really well.”

Barnes made six birdies on the day, including a pair of 40-footers on the second and eighth holes to go along with a chip-in for eagle on the short par-4 13th, where he drove it over the green and holed a delicate pitch down the slope.

Barnes added that he was spurred on by playing partner Creel, who briefly reached 8-under on the day before a closing bogey left him with a 7-under 64 on the day in solo second.

“It does help when you’re seeing someone else hit good shots and make some putts. It kind of gives you some extra motivation. It was fun out there today,” said Barnes.

“Erik and I were battling back and forth all day and I think when you’re seeing someone else play well it’s easier to feed off them and do the same. It was a solid day,” added Creel, a second year PGA Tour Canada member from Cheyenne, Wyoming.

Barnes capped his day with a birdie on the 18th, where he drew a flier lie in the rough and hit a 7-iron into the wind from 177 yards, a distance he said he would normally hit a 5- or 6-iron. He knocked it to within four feet and calmly rolled in the birdie for the best round of the day.

“When you’re hitting a shot like that from that lie in there close, it’s a good day.”

The last time Sarnia, Ontario’s Matt Hill teed it up at The Players Cup, he was playing some of the best golf of his life, having captured his first PGA Tour Canada win the week before and sitting atop the Order of Merit, where he would go on to finish the 2012 season.

Hill, who finished tied for eighth here in 2012, showed that his game remains solid on Thursday, carding a 4-under 67 to share sixth spot after one round. He’s the top Canadian after round 1.

“I wouldn’t say I hit it great, but I made a lot of putts,” said Hill. “If I can hit it a little better and keep it up with the putter, it should be a good week.”

The former Team Canada member and 2009 Jack Nicklaus Award winner at N.C. State said he holds fond memories of his appearance here in 2012, when he would go on to be named PGA Tour Canada Player of the Year.

“I’m trying to take as much as possible from that year,” said Hill. I didn’t really make a lot of bogeys that year, which was fun. I’m just trying to do the same thing,” Hill said.