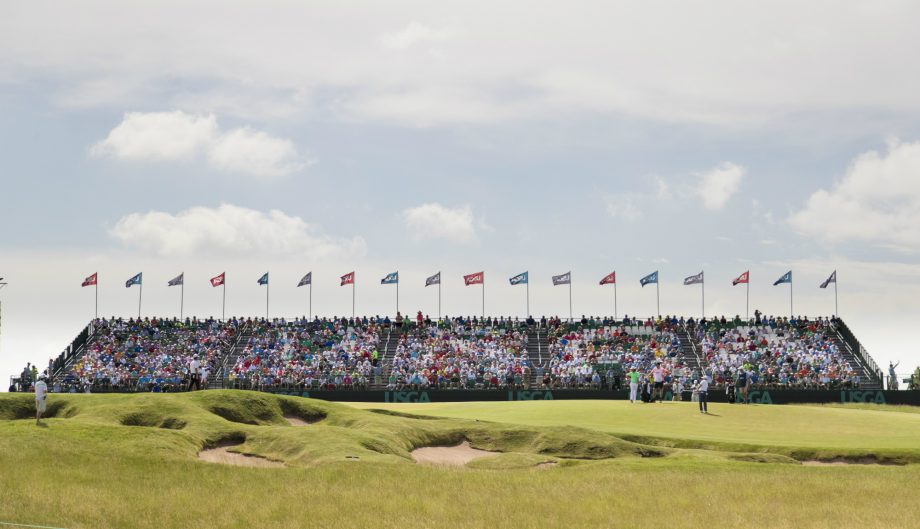 The USGA wants to get away from references of the U.S. Open being the toughest test in golf, preferring instead the “ultimate test.”

The question is whether Erin Hills delivered either in the opening round.

Rickie Fowler never came seriously close to a bogey on his way to a 7-under 65, which matched the U.S. Open record to par for the opening round. Jack Nicklaus and Tom Weiskopf each shot 7-under 63 in the first round at Baltusrol in the 1980 U.S. Open. They were three shots clear of anyone else.

Fowler only had a one-shot lead over Paul Casey, who started eagle-birdie, and Xander Schauffele, a rookie on the PGA Tour who is playing his first major championship.

And it doesn’t stop there.

Seventeen players shot in the 60s at Erin Hills, which at 7,845 yards was the longest course in major championship history. The 44 players who broke par in the opening round set a U.S. Open record that had stood since there were 39 subpar rounds at Medinah in 1990.

Most sub-par scores in the first round of a U.S. Open.

At times, it felt like a regular PGA Tour event.

Attribute that to the Wisconsin weather. The rain leading into the start of the U.S. Open only softened the greens, and they already were slightly softer than usual because of the wind that could lead to unplayable conditions. The wind wasn’t nearly as strong as thought.

It was the perfect recipe for low scoring, provided the ball was kept in the short grass.

Rory McIlroy found that out the hard way. He didn’t hit a fairway after the 10th hole and shot a 78, his highest score in the U.S. Open. Jason Day had two triple bogeys, the first one when it took him three chips to stay on the green at the fourth hole, and shot a 79.

Dustin Johnson had to gouge it out of the rough on at least eight occasions, including the par-5 14th hole when he tried to play conservatively and laid up into rough. That led to a double bogey, which hurt him as badly as making only one birdie. The defending champion shot a 75.

“The golf course has got plenty of moisture in it,” Justin Rose said after his 72. “It’s the kind of golf course that if you’re on point and playing well and you’re in the fairways, you really feel like you can be aggressive and attack and make some birdies. But as soon as you get out of position on this golf course, you’re really struggling and suffering for par.”

"I never really tried to make a birdie."

Says Tommy Fleetwood who made five birdies in Round 1 of the U.S. Open. pic.twitter.com/GZzkamC50y

The U.S. Open is known for putting a premium on par, even as the USGA tries to convince golf fans that it’s not preoccupied with par. It has learned to accept that in pristine scoring conditions – mainly, soft conditions – low scores don’t distract from the tournament.

What raises immediate questions about Erin Hills is the number of players under par, even with so many top stars struggling. Of the top 10 players in the world, only Fowler (No. 9) and Sergio Garcia (No. 7), who shot a 70, broke par.

No one from the top 17 players on the leaderboard after one round has won a major.

Everyone expects the U.S. Open to get harder as the week goes on because it usually does. But more storms were in the forecast for Friday afternoon and Saturday afternoon, so there’s not much chance of Erin Hills getting firm, fast and scary.

The last thing the USGA wants is to trick up the golf course, because the U.S. Open has had too many bumps (conditions at Chambers Bay, the rules mess at Oakmont) to risk anything but a smooth week.

And the biggest test of all could be the USGA proving that it’s not trying to protect par.

“I know people get caught up with this even par thing,” USGA executive director Mike Davis said this week. “I can tell you nobody at this table got caught up. We don’t even talk about it. What we do talk about is making sure we can adjust the course. If there’s soft conditions, maybe we tuck a hole location a little bit more, versus if we get real firm conditions and it gets windy, we’re sitting there talking among ourselves saying, ‘How do we tone this thing down?’

“It really isn’t about the score,” he said. “It’s about just setting the golf course up properly.”

What it’s really about is a stern test. The ultimate test. And three rounds remain to judge that.