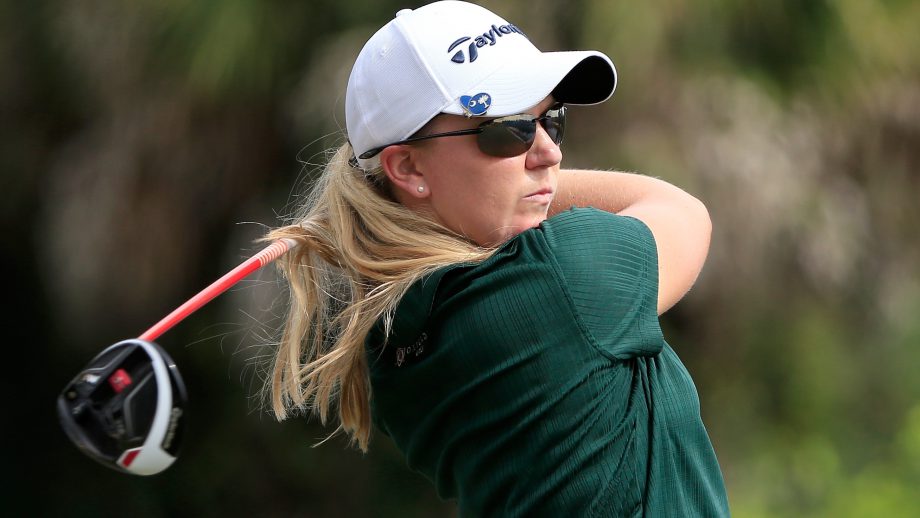 NAPLES, Fla. – Austin Ernst leads the tournament, Sei Young Kim leads the race for $1 million and Lydia Ko has edged closer to everything else that’s at stake this weekend.

So as expected, the LPGA’s finale for 2015 is off to a hectic start.

Ernst shot a 6-under 66 Thursday to take a one-shot lead over South Korea’s Mi Hyang Lee after the opening round of the CME Group Tour Championship. Kim, part of a group two shots off Ernst’s pace, would win the season-ending $1 million bonus if the tournament ended in its current order. Ko shot a 69 to move closer to earning player of the year honours, plus the scoring and money titles.

“I’ve just got to think of it as another tournament,” said Ko, the 18-year-old from New Zealand who holds the No. 1 ranking. “That’s what I said for all the majors. I’ve got to focus on one shot at a time and not think like it’s a major so it’s more special and all that. Obviously, it is, at the end of the day. But it’s another tournament. We’ve got the world’s best golfers here, the top players are here, it’s a great field, it does feel like a major.

She would know, after sweeping the tournament and the bonus a year ago. Ko opened with a 71 at Tiburon last year and was five back after the first round; she was two shots better, and two shots closer to the lead, after Thursday.

Meanwhile, Ernst – who has struggled mightily in her past trips to Tiburon – took a new and simple approach to the course this time. All she tried to do was stay out of trouble, and she made it look easy.

“I drove it pretty well today,” said Ernst, an American who hit 17 greens. “I’ve been hitting it well this year. It’s really just a matter of I needed to get myself in better positions. I didn’t really put too much stock in how I’ve played here the last two years.”

Lee was alone in second. At 68, Kim was in a six-way tie for third with five Americans – Jennifer Song, Cristie Kerr, Brittany Lincicome, Jaye Marie Green and Gerina Piller.

“It’s great to come in and have a good round on the first day,” Lincicome said. “My dad always told me, you can’t win it on the first day but you can definitely lose it. So I put myself in contention a little bit.”

Kim, a three-time winner this year, already has wrapped up rookie of the year honours and entered the week as one of the nine players with a shot at winning the “Race to CME Globe” and the accompanying $1 million bonus. Ko, Inbee Park and Stacy Lewis would all capture that bonus by winning the season finale; Park struggled with the Bermuda greens and shot 71, while Lewis opened her last chance at winning a tournament this year with a 72.

Ko and Park will decide the world’s No. 1 ranking this week, along with the scoring title, player of the year and the money crown. For Ko to ensure she goes into the off-season with all those, she needs to finish two shots ahead of Park.

“I don’t know how they are sleeping at night, to be honest with you,” said Lincicome, who isn’t one of the nine with a shot at the $1 million. “It’s a lot of pressure, especially Lydia, she is so young and she handles it so well. To have so many different prizes on the line, I don’t think I would sleep.”

Canada’s Brooke Henderson also opened with a 72, while compatriot Alena Sharp had a 74.