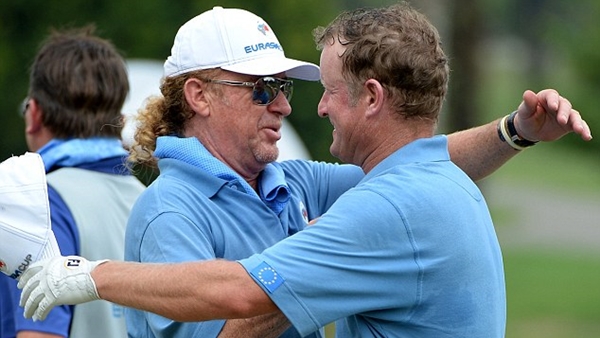 In other fourballs competition, Gonzalo Fernandez-Castano and Stephen Gallacher beat India’s Gaganjeet Bhullar and Anirban Lahiri 4 and 3 before Victor Dubuison and Joost Luiten, who came close to hitting an albatross at the 11th, made it 3-0 in by defeating Prayad Marksaeng and Siddikur Rahan 3 and 2.

Denmark’s Thomas Bjorn and Thorbjorn Olesen had a 2-up win over the Japanese pair of Koumei Oda and Hideto Tanihara and Europe completed a clean sweep when Graeme McDowell and Jamie Donaldson recovered from being 3-down to beat Kim Hyung-sung and Nicholas Fung of South Korea 3 and 1.

The EurAsia Cup format is similar to the Ryder Cup, with the teams playing foursomes, or alternate shot, on Friday and concluding with singles on Saturday.

“Yeah, can’t get anything better than that really. I started with my match with Pablo and played good today and I don’t think there is a better way to lead a team,” Jimenez said.

Jimenez had two eagles and three birdies in the better ball format.

“I don’t think anybody scored lower than me today so I was delighted with how I played personally but it was also really satisfying to see all of the boys playing so well.”

Donaldson, who leads the Race to Dubai standings on the European Tour, warned against complacency.

“We have always said during practice that we simply can’t underestimate our opponents. We are playing in Malaysia, it’s so hot and the courses favor them,” the Welshman said.

Thongchai said a comeback isn’t entirely out of the question.

“Team Europe was very strong today,” he said. “We will try again tomorrow … we are breaking all the pairings except myself (with Kiradech).”

Players and officials are wearing black ribbons and a “Wall of Condolence” has been set up on the tournament site where visitors can leave a message of support for those missing in Malaysia Airlines flight MH370.

Malaysian authorities said Wednesday it is almost certain the plane crashed in the Indian Ocean, killing all 239 people aboard.

The EurAsia Cup is sanctioned by the European Tour and the Asian Tour. It is not the first match play event pitting players from the two continents against each other. The Royal Trophy, a contest between Asia and Europe and long associated with five-time major winner Seve Ballesteros, has been played seven times in Asia.