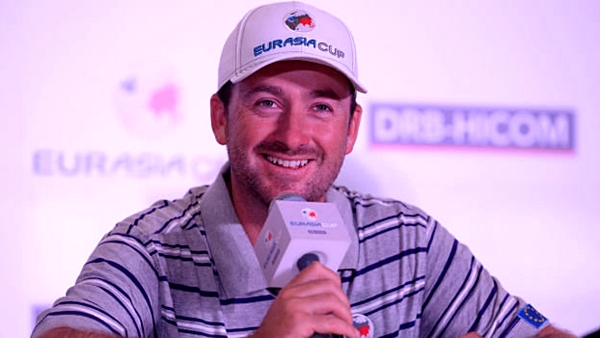 KUALA LUMPUR, Malaysia – Asia had two wins and two halves in the five foursomes matches at the EurAsia Cup on Friday, with Europe needing a late rally in the other match to hold a 7-3 lead after two days at Glenmarie Golf and Country Club.

Prayad Marksaeng of Thailand and South Korea’s Kim Hyung-sung had a 4 and 3 win over the Danish pair of Thomas Bjorn and Thorjorn Olesen in the first result of the day. Then Anirban Lahiri and Siddikur Rahman closed out a 1-up victory over Joost Luiten and Victor Dubuisson after Asia led 2-up with two to play.

Europe, which led 5-0 after winning all fourball matches Thursday, then gained two halves before Graeme McDowell and Jamie Donaldson combined to give the visitors their only full point of day two.

McDowell and Donaldson, 1-down with three to play, rallied for a 2 and 1 win over Gaganjeet Bhullar and Nicholas Fung.

“It wasn’t really anything to do with complacency on the European side,” McDowell said of the turnaround on day two. “I think it was a lot to do with the fact that the Asian team came out and played very well today.”

The teams will play 10 singles matches Saturday, when Europe will need just 3.5 points to clinch the first trophy in the Ryder Cup-style event.

Asia could have been in a much better position had the Thai pair of Thongchai Jaidee and Kiradech Aphibarnrat maintained their 1-up lead at the 18th in their second consecutive match against Miguel Angel Jimenez and Pablo Larrazabal.

And the Japanese pairing of Koumei Oda and Hideto Tanihara also let their advantage slip to be all square with Gonzalo Fernandez-Castano and Stephen Gallacher. Oda and Tahihara were 3 down, took the lead, then had to be content with a half-point.

“We have a lot of confidence coming back tomorrow. Things got better today after the captain worked so hard to change the partnering in the team,” Aphibarnrat said. “We almost had five points today but we still managed to get three. So I still think if we can get couple of points from first few matches tomorrow, we can turn things around.”

Donaldson said it was crucial that he and McDowell held on to ensure Europe maintain a buffer.

“At one point, I looked up at the board and it was all red,” he said, “so it was very important to turn that game around after being down early.”