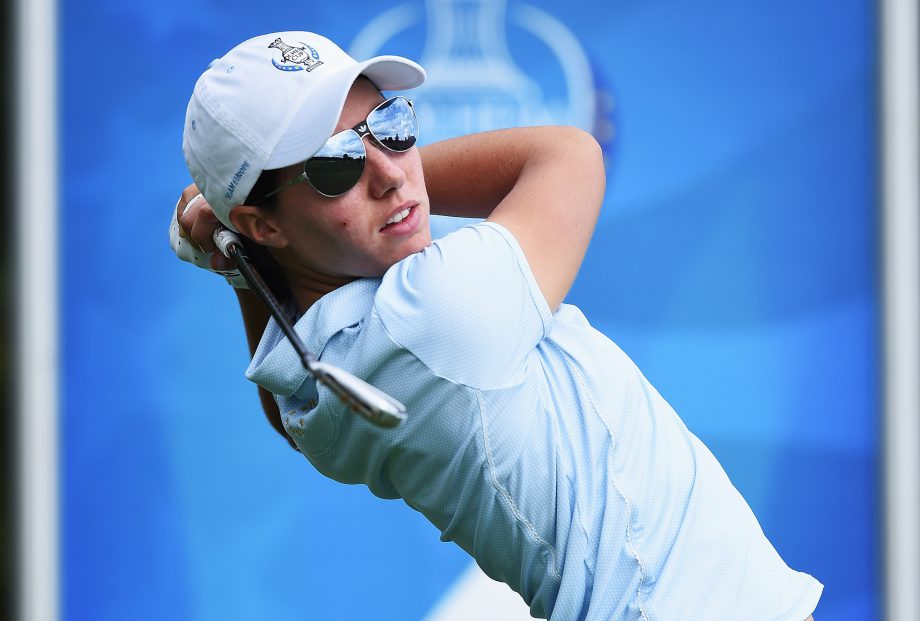 The Spanish player holed out for eagle from 135 yards with a 9-iron on the par-4 17th hole Friday to pull her and English partner Melissa Reid even with Americans Cristie Kerr and Lexi Thompson in the fourball match. Play was suspended because of darkness after the shot, with Europe leading the event 4-2.

“I hit it really good and I’m so happy to help the team,” Ciganda said. “There’s still one hole to play, so there is nothing yet but I hope we can add a point.”

Kerr and Thompson took a 2-up lead with birdies on Nos. 13 and 14, but Reid won the par-5 16th with a birdie and Ciganda tied it with her eagle.

“They fought on the back nine to get a few holes going their way,” Thompson said. “But we’ll come back tomorrow early to finish our last hole. We’re pumped. We’re going to be ready.”

In the other suspended match at St. Leon-Rot Golf Club, German pair Sandra Gal and Caroline Masson were 1 up through 15 holes against Gerina Piller and Brittany Lang. Play was suspended earlier for 55 minutes because of the risk of thunderstorms.

“Very crazy,” U.S. captain Juli Inkster said. “We got smoked the first two matches. And we’re looking pretty good in that third match, and then Melissa makes a good putt on 16 and we miss ours. And then Carlota holes it out on 17. That’s the beauty of match play. It’s the beauty of golf.”

England’s Charley Hull won two matches, teaming with fellow English player Melissa Reid to beat Michelle Wie and Brittany Lincicome 2 and 1 in the morning foursomes, and joining France’s Gwladys Nocera for a 3-and-2 victory over Alison Lee and Angela Stanford in fourball.

The 19-year-old Hull had five consecutive birdies in the afternoon match.

“I felt I played great all day, I rolled a couple in, so it was great,” said Hull, 4-1 in two appearances in the event. “I’m just buzzing for tomorrow.”

The 20-year-old Lee, the only rookie on either team, recovered from a stomach bug to play.

“I didn’t feel good to practice at all yesterday or the day before.” Lee said. “I woke up this morning and I felt brand new.”

In the other afternoon match, Swedes Caroline Hedwall and Anna Nordqvist topped Paula Creamer and Morgan Pressel 4 and 3.

“I didn’t feel that me and Suzann played all that bad this morning. We just couldn’t really make any putts,” Nordqvist said. “So I was actually surprised she was sitting out this afternoon.”

Nordqvist rebounded to birdie seven of the first 13 holes in the afternoon match.

Europe has won the last two events – in 2011 at Killeen Castle in Ireland and 2013 at Colorado Golf Club – to cut the Americans’ series lead to 8-5.

“It was a good day for us but there’s a long way to go,” European captain Carin Koch said. “They were all so confident and comfortable on the course. I told them last night to just go out and enjoy the crowds and enjoy the fans and the stage they’re on this week. And I think they all did that. It looked like they were having a lot of fun all day, really. I couldn’t be more pleased with them.”

After another day of four morning foursomes matches and four afternoon fourball matches, the event will end Sunday with 12 singles matches.