Families that play together 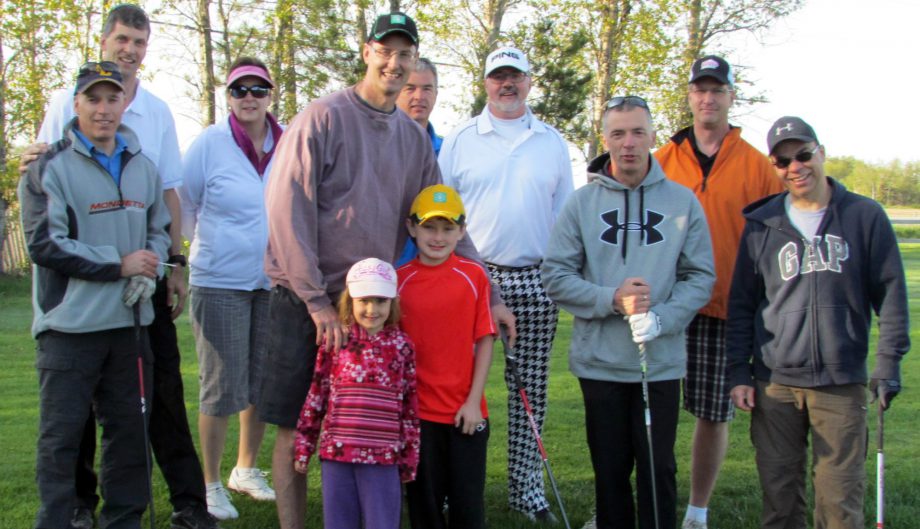 Whether it’s a group of four or 400, golf has always been a game that’s created memories among those closest to us.

Rewind the clock to Christmas 1977 in little Noëlville, Ont., which is located about an hour south of Sudbury in the municipality of French River. Appropriately named for this time of year, Noëlville — a 735-square-kilometre area with a population of just over 2,600 — is small in size but big in community.

The Mayer family, mid-afternoon on December 31st, challenges the Carriere family to a hockey game.

“It was just a friendly competition,” recalls Mike Mayer, whose father Claude was among the game’s founding players. “It was just for fun. We had so much fun and we wondered if the community would buy into it. And they did. It just took off. It was crazy.”

Fast-forward to today, and the hockey tournament includes 32 teams with about 15 players each, and is one of the most anticipated events annually marked on the calendar.

That said, it’s not as big as the softball competition that the families decided to organize a few years after the beginning of the hockey tournament, which now has approximately 100 teams who participate each summer.

The hockey and softball tournaments — which are so popular they even have their own Wikipedia entries — have been going on since the 1970s. The elder Mayer realized his kids enjoyed golf as they got older, and the younger Mayer, Mike, would usually tee it up with approximately 20 people the day after the softball tournament. It only made sense to then add a golf tournament to the rotation of yearly family events.

It started a few summers ago at The Maples Golf and Sports Club in Noëlville.

Adding intrigue to the Noëlville Family Golf Tournament is the fact that The Maples is a Tri-Par designed course, the first, the club claims, in the world.

With multiple tee decks on every hole, each can be played as either a par 3, 4, or 5. According to its website, there are 387,420,489 possible combinations of golf rounds and it can be played up to a par 90.

Mike Bouffard, owner of The Maples, says there were 40 people who played golf in the tournament a year ago, with more, he hopes, to come.

There’s a constitution that participants must follow in order to participate in the hockey tournament — an example: one must be within seven generations of an original participant in order to play, and the same holds true with golf.

“There are a lot of rivalries,” Bouffard says with a laugh. “You have the pride of your family on the line. Especially in hockey, when two families meet who don’t exactly like each other there’s always competition. But in golf everyone is having a good time. It’s all about bonding in the family.”

“It’s pretty well the way it is around here. Families want to meet. It gives them an occasion to get together,” he continues. “The golf tournament is on Father’s Day weekend, so it just fits well to have a tournament then. It’s all about the family ties.”

A family getting together is an important aspect to any longstanding golf tournament — whether it is in small-town Ontario or the smallest province in the country, as is the case with the Kenmac Energy Family Golf Classic in Prince Edward Island.

Dan MacIsaac, who started Kenmac Energy Inc. in 1986, picked up the sponsorship of the Family Golf Classic 30 years ago. As one of 10 kids, he grew up across the street from Belvedere Golf Club — the host club — and admits the course was a big part of the lives of he and his siblings.

A key highlight of the social calendar in Charlottetown every summer, the mid-July event is a hub for families year after year.

“There’s been a lot of great memories, but I think playing with third-generation kids in the tournament is a testament to what this day means to many families,” says MacIsaac. “It’s also a lot of fun to see the youngest kids each year prepare for their first time in the tournament.”

MacIsaac notes the tournament annually awards prizes for families in different divisions, and specifically a full set of clubs (with bag) for kids 13-and-under, and a driver for kids 14 to 18. Parents aren’t left out, however, as each year there is a draw for two nights and two rounds at Cabot Links.

The tournament isn’t just an opportunity for families to gather and play the game they love; there is an aspect of growing the game as well. And, like the Mayers and Carrieres 1,800 kilometres away in Noëlville, the families who participate in the Kenmac Energy Family Golf Classic are eager to return every summer to help the next generation enjoy the game as much as they do.

“I enjoy seeing kids playing the game I love while meeting new friends and learning life skills at the golf course,” MacIsaac explains. “There’s nothing better as a grandparent myself to see your grandkids dropped off at the golf club in the morning and see them make friends and enjoy spending the day at the club as I once did. I’ve got a commitment to sponsor this family golf day until I get to play with my youngest grandchild, who is seven now (so) three more years for sure. We have had a lot of fun over the years on this day in July.”

Whether an annual golf tournament is the result of a longstanding family rivalry that started one New Years Eve on the hockey rink or because there was an obligation to continue to give back to a golf course that gave you so much growing up in Charlottetown, the crux of it all is that family togetherness will keep tournaments — and golf itself — thriving well into the future.