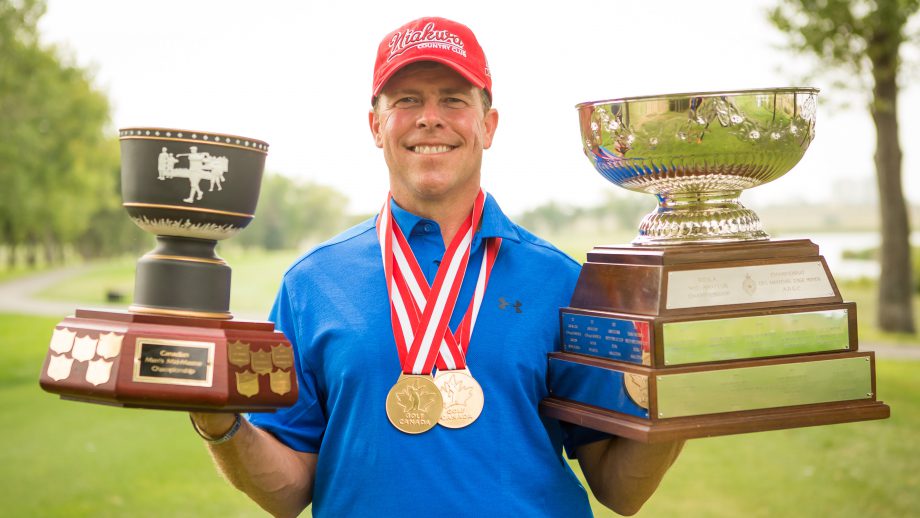 To catch up with Todd Fanning is not unlike anyone else who may work in a non-descript office building. Your conversation gets interrupted by a group of people looking to use the meeting room for a conference call, and when asked how often he gets to play golf, the answer (“I don’t”) comes with a hearty chuckle.

But Fanning, who is a sales manager for a large equipment leasing company in Winnipeg, isn’t just that.

For years he chased a professional golf dream, playing on the Web.com Tour and making a few appearances at the RBC Canadian Open before rescinding his professional playing privileges and returning to regular job and a regular life.

That is, until last summer.

Fanning shot a 2-under-par 69 at the Canadian Men’s Mid-Amateur Championship at Wascana Country Club to nip three-time champion Garrett Rank and 54-hole leader Steven Diack in a four-hole playoff a year ago this August.

He didn’t plan on playing a championship schedule in 2017, but when it was announced The Wascana would play host, he signed up to play the Manitoba Mid-Amateur to try to qualify (which he ended up winning), since his father lives in Regina and he had played Wascana a lot in his golfing life.

With the win at the Canadian Mid-Amateur, Fanning will make his fifth appearance at the RBC Canadian Open this summer when it returns to Glen Abbey Golf Club in Oakville, Ont.

“I’m just going to be the guy in the middle of the range and they’re going to say, ‘well who’s that?’ says Fanning. “It’s going to be quite funny.”

Self-deprecating humour aside, Fanning truly earned his spot in the RBC Canadian Open. He held off one of the furriest charges in the Canadian Mid-Amateur’s history, as Rank, who started the day eight shots back of Diack’s lead, shot a 5-under-par 66 to jump into a tie for the lead.

“It was the best nine holes of golf I’d ever seen,” Fanning says of Rank’s final nine holes, where she shot a 31.

“I just executed down the stretch. I almost won it in regulation. I had an eagle putt from the back fringe and thought it was going in, and I looked foolish when it didn’t. But out of the hundreds of people watching with 45 minutes to go, I don’t think anyone would have thought, other than my wife, that I would have won that tournament.”

But as per usual with golf, the most unpredictable of games, it was indeed Fanning who came out on top. He made a par on the fourth playoff hole, and when the 25-year-old Diack made a bogey, the championship was his.

He unleashed a Tiger Woods-esque fist pump and a little dance (“I don’t know what happened there… it was very bizarre,” he recalls with a laugh) and the accomplishment finally set in.

“I realized what happened. I was turning 50 and I get to play Glen Abbey again. All those thoughts raced through my mind,” he says.

Fanning says one of his good friends arrived in Regina from Winnipeg to watch the final round, and will have “quite a few” people out with him at Glen Abbey later this summer to celebrate his success.

At work, he says, it made for a great story. People would come up to him to say they watched the live-stream of the playoff (Golf Canada’s social media team played it out on Twitter, via Periscope) and his colleagues said he looked calm.

“I said it was because I have a great job and get to work with (them) so that was just fun for me,” says Fanning, laughing.

Before the RBC Canadian Open Fanning will return to defend his title at the Manitoba Mid-Amateur in early July, and says he will also play this year’s Canadian Mid-Amateur at Victoria Golf Club in August.

But he says what he’s most looking forward to this summer is another shot at Glen Abbey.

Fanning had the morning draw on Thursday in 1998, the last time he played there (he played the RBC Canadian Open at Royal Montreal in 2001 and at Angus Glen in 2002), and he managed to get off to a great start. He says he told his caddie he was having fun, but his caddie wasn’t.

“’Not yet, not until we got to the top of the leaderboard,’” Fanning recalls what his caddie told him.

Fanning hit a 6-iron into the par-3 7th and knocked in the birdie putt, so he got to 4-under par on his round and got to the top of the leaderboard in the morning. He went on to miss the cut, however, and will be thinking about that when he goes back.

But the fact that he gets to go back at all is the most exciting thing of all.

Fanning says there’s nothing on his radar to come to Oakville prior to July to get in a practice round, but he will arrive on site a little earlier than most to ‘cram for the exam,’ he says.

When he played Glen Abbey in the late-90s the golf course setup was different, but there’s nothing that will catch him off guard, as he watches the tournament on television and sees what the current course looks like. He admits he’ll be behind in his preparation, but is looking forward to watch should be a fun week.

“I have a full-time job so I don’t expect to go out there and contend and be in the last group on Sunday, but to me it’s all about family,” he says, as his 17-year-old son will be his caddie for the week. “My whole family is coming. My children never got a chance to see me compete as a professional, and now I have three of them and they’re all going to be there. It’s going to be a really fun time for them.”