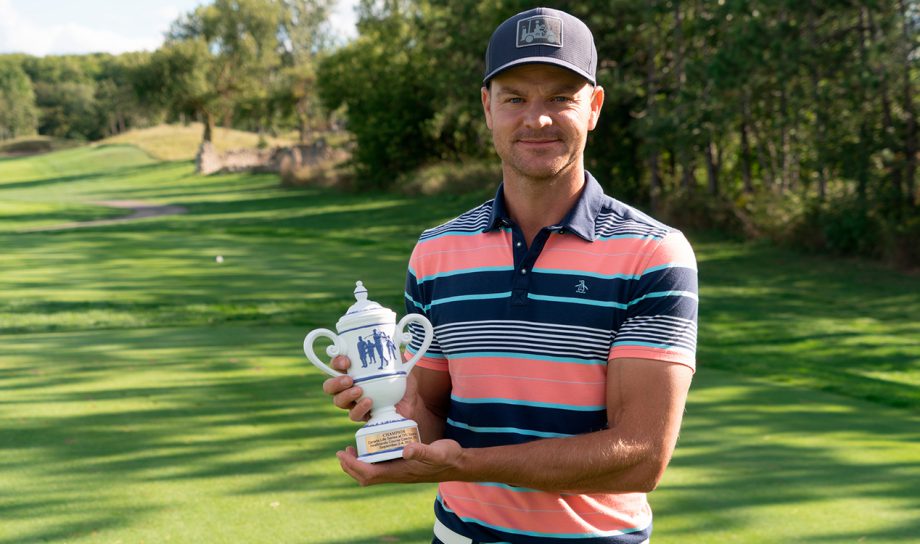 CALEDON, Ontario—Albert Pistorius made it look easy as he quickly broke away from the logjam of three other players tied atop the leaderboard when the final round of the Canada Life Series at TPC Toronto: Heathlands Course event began. Pistorius eagled his first hole of the day and birdied the third to quickly move to 10-under. As it turned out, Pistorius would need all those strokes.

The South Africa native who lives in Calgary was 4-over the rest of the way but that blazing start allowed him to win the third Canada Life Series tournament by a stroke over Andrew J. Funk, Callum Davison and Points List leader Yi Cao. The victory earned Pistorius 500 points, a $9,000 first-place payday and, most importantly, his first professional victory.

It was a battle late in the round, as wind blew strong and often on a crisp late-summer day. With the final grouping of Pistorius, Cao and Funk all tied at 8-under through 15 holes and Davison playing ahead, also at 8-under, it came down to who could make a putt down the stretch. As it turned out, it was Pistorius, at the par-5 16th, when he made his final birdie of the day—from eight feet. Meanwhile, the other three players all had late bogeys coming in, giving Pistorius the cushion he needed to bogey No. 18 and still walk away with the title.

“There were a lot of thoughts out there just barging into your mind, and you just have to keep focused on what you’re trying to do,” Pistorius said of both the pressure and the elements, not necessarily in that order. “It’s exhausting. With the wind swirling, it wasn’t easy out there today. Some of it was like a three-club wind.”

The weather took its toll on the field, and the leaders were not exempt. Davison shot himself out after he made back-to-back bogeys at Nos. 15 and 16. Funk bogeyed the par-3 17th to end his chances, and Cao bogeyed No. 16. After their bogeys, the trio could make nothing but pars.

“Today being such a difficult day, it’s extra sweet to be able to win. It was so tough to choose clubs. Some of the pins were tucked way back, and it was hard to get it close, especially on the back nine,” explained Pistorius, who put playing professional golf seven years ago. When his then-wife took a job in Calgary, Pistorius moved with her and began working at Pinebrook Golf and Country Club as a teaching pro. His decision to give tournament golf another try turned out to be a good one.

With a two-shot lead standing on the 18th tee, Pistorius split the fairway on his drive. On his full-wedge second shot, he caught the downslope on the green just in front of the cup, and the ball rolled away, leaving himself a 30-footer back up the hill. Pistorius misjudged the distance on his birdie effort and rolled his putt seven feet past the hole. With no scoreboards on the course, Pistorius was a little unsure where he stood against the field. He missed that putt, settling for bogey.

“On the last hole, I three-putted and thought I was going to be in a playoff,” Pistorius admitted. “It was just nice to know I didn’t have to go through that. I would have loved to show a little more emotion on 18, but I’m just glad that I got the win.

“This is my first win as a professional,” he added, “so I have to go home and think about this. It hasn’t really come to my mind that I’ve won. I’m pretty sure it will sink in a little later.