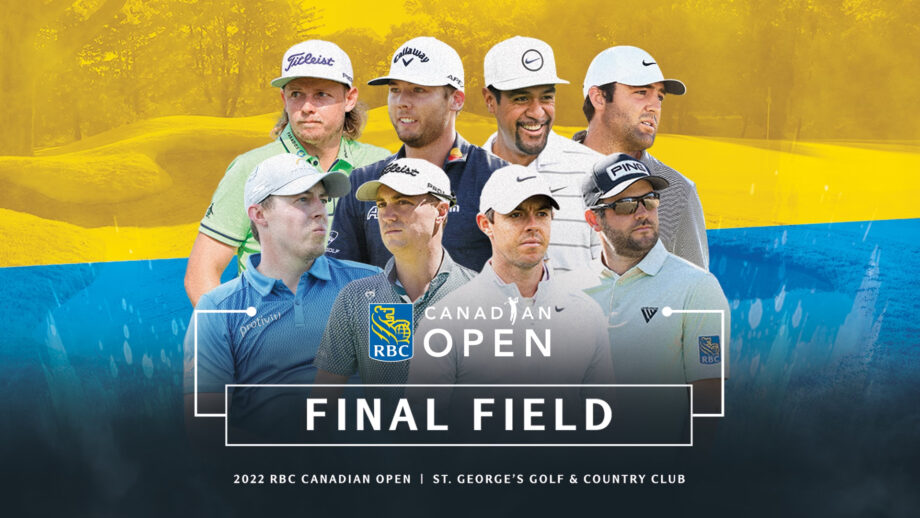 Golf Canada and RBC are pleased to announce the final field vying for the US$8.7 million purse at the 2022 RBC Canadian Open, June 6-12 at St. George’s Golf and Country Club in partnership with nearby Islington Golf Club as the official practice facility.

After a wait of 1,093 days and two years of cancellation due to the global pandemic, 2019 champion and world no. 7 Rory McIlroy returns to Canada looking to defend his title against a stellar field of PGA TOUR stars led by world no. 1 and 2022 Master champion Scottie Scheffler, world no. 3 and 2022 The Players champion Cam Smith, world no. 4 and 2022 PGA champion Justin Thomas and world no. 9 Sam Burns, a 3-time PGA TOUR winner in 2022.

Other notable additions to the field for the 111th playing of Canada’s National Open Championship include world no. 15 Matthew Fitzpatrick, world no. 16 Tony Finau, world no. 23 Tyrell Hatton and big-hitter Cameron Champ along with past Major winners, Shane Lowry, Patrick Reed, Justin Rose, Jason Dufner and Danny Willet.

The field for the celebrated return of the 2022 RBC Canadian Open includes five of the top-10 players in the world (Scheffler, Smith, Thomas, McIlroy, and Burns) and the top-four players on the current FedEx Cup ranking. Seven major championship winners (accounting for 11 titles) will compete along with eight 2021-22 PGA TOUR in-year winners, six past champions of the RBC Canadian Open, and 21 Canadians.

“We are extremely pleased with the field of world-class competitors that make their way to Canada to join us in the celebrated return of the RBC Canadian Open and challenge for the 111th playing of Canada’s National Men’s Open Championship,” said RBC Canadian Open Tournament Director Bryan Crawford. “Led by our defending champion Rory McIlroy, this year’s championship features a strong mix of stars from all around the world and the deepest field of Canadian talent ever to challenge for our National Men’s Open title. Along with great golf, fans will be treated to an incredible festival environment with terrific on-site activities including the Recipe Unlimited Fareway food and beverage experience and the RBCxMusic Concert series featuring Flo Rida (June 10) and Maroon 5 (June 11). It is the return that Canadian golf fans deserve as we get set to kick off summer.”

In total, 156 players will compete for the US$8.7 million purse next week in Toronto when the RBC Canadian Open returns to the storied Stanley Thompson design for the sixth time and first since 2010.

Due to current Government of Canada travel restrictions extending beyond June 1, Team RBC ambassadors Webb Simpson and Matt Kuchar are not able to participate in the championship and have officially withdrawn from the 2022 RBC Canadian Open. Golf Canada and RBC look forward welcoming Simpson and Kuchar back to Canada for the 2023 RBC Canadian Open at Oakdale Golf & Country Club.

Final Tournament Exemptions to be Named…

The final four exemptions into the field for the 2022 RBC Canadian Open will be handed out at the Monday Qualifier on Monday June 6, to be played at Oakdale Golf and Country in Toronto, host site of the 2023 and 2026 RBC Canadian Open.

Click here for the full current list of competitors competing in the 2022 RBC Canadian Open, June 6-12 at St. George’s Golf and Country Club in partnership with nearby Islington Golf Club as the official practice facility.

Tickets for the 2022 RBC Canadian Open are available here.