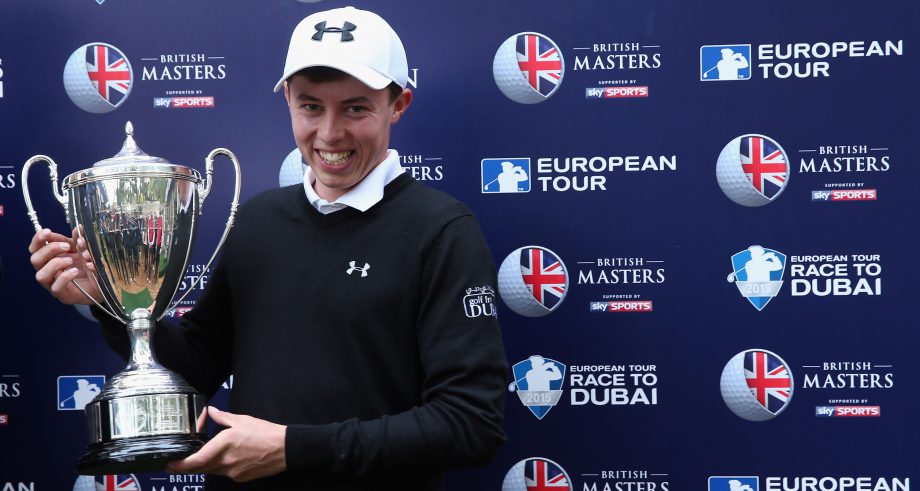 WOBURN, England – Matthew Fitzpatrick signaled his emergence as one of Europe’s most prominent young golfers on Sunday, shooting a 3-under 68 to complete a wire-to-wire victory in the British Masters at Woburn for his first professional title.

The 21-year-old Englishman, playing his first full professional season on the European Tour, shot five birdies in his final round to win by two strokes and finish on a 15-under total of 269.

“I honestly did not think I was going to win this year,” Fitzpatrick said, even though he finished second in the European Masters in Switzerland in July. “A wire-to-wire victory is unbelievable for me, I really feel that is an amazing achievement. I dreamt of doing it but I never thought I would be good enough.”

Fitzpatrick’s front nine was quiet and unspectacular, making seven pars, a bogey and a birdie on the fourth to go out in 35 shots for par.

But the 2013 U.S. amateur champion shifted gears on the back nine with four birdies.

“It was frustrating after the front nine, I could not get anything going,” Fitzpatrick said. “But the back nine, I started brightly and it felt like I was swinging it a little bit better and I managed to pull it off.”

Fitzpatrick was jostling for the lead with Soren Kjeldsen (69) at the top of the leaderboard on the closing stretch and they both missed putts for the outright lead within minutes of each other on Nos. 13 and 14.

Fitzpatrick saw an eight-footer slide another two feet beyond the hole on the 13th, which he returned for par, while Kjeldsen spurned a straight one from 12 feet moments after on the 14th.

It was Kjeldsen, 19 years Fitzpatrick’s senior, who crumpled under the pressure.

On the par-5 15th, he gave himself a 30-foot putt for eagle, but an excessive swing saw his ball race off the green. The 40-year-old Dane rescued par, before a wild and wayward tee shot on No. 16 settled in the rough, behind the base of a tree.

He escaped, but failed to get up and down for par from 60 feet, by which point Fitzpatrick had demonstrated his composure to surge two shots clear.

After Fitzpatrick escaped from a fairway bunker on the 15th, a resplendent approach with his 8-iron from 175 yards settled 20 feet before the flag. On the same green that had troubled Kjeldsen moments before, the youngest player in the field rolled the ball firmly into the center of the cup for birdie.

On the par-3 17th, Fitzpatrick’s tee shot finished eight feet from the pin for a routine birdie before a bogey on the 18th.

Kjeldsen ended tied for second on 13 under alongside Paraguay’s Fabrizo Zanotti (69) and Bridgestone Invitational winner Shane Lowry (67) of Ireland.

Thailand’s Kiradech Aphibarnrat, who started the day tied for the lead with Fitzpatrick, carded a 1-over 72 and was tied fifth on 11 under.