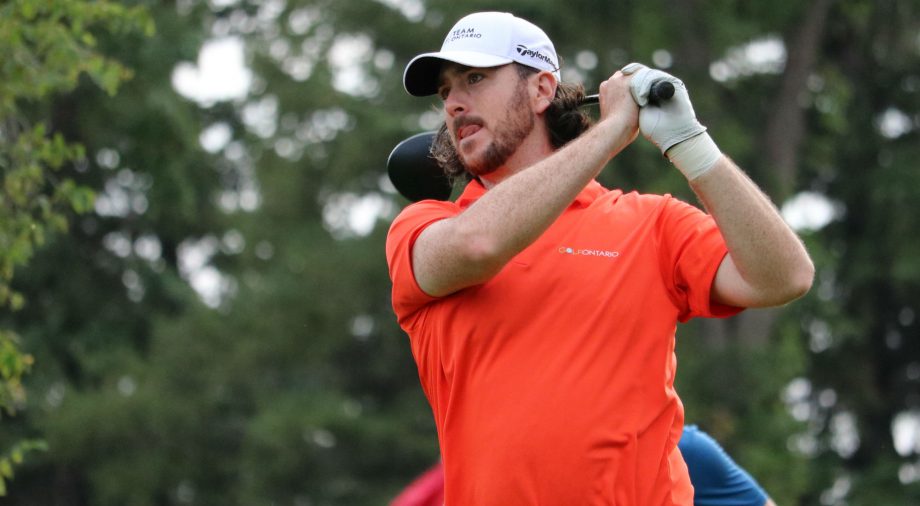 Charles Fitzsimmons shot a 6-under-par 65 to lead the Canadian Men’s Mid-Amateur Championship after round one at Wascana Country Club on Tuesday.

The 30-year-old from London, Ont., who started on the back nine, stayed bogey-free on the day and carded four of his six birdies in his final six holes of the day.

“I hit the ball really, really well and I was able to make some putts,” he said, after walking off the ninth green. “When I got into some trouble I was fortunate to be in a good enough spot to recover and even made a couple birdies doing so. So, that’s always a bonus.”

Daniel Brown, from Grand Folks, B.C., shot a 5-under-par 66 to sit alone in second, one stroke back of Fitzsimmons. The 34-year-old jumped to the top of the leaderboard after he hit a nine-iron from 150 yards out on the 12th hole to hole out for an eagle.

“I just hit a half-nine-iron and it took one bounce up and spun a little bit to the left and just went right into the hole. Making an eagle always helps and after that I told myself to just hit fairways and keep it in play, hit the greens and you’re bound to make another putt.”

Brown made his fifth and final birdie of the day on the following hole and limited himself to two bogeys on the day, both on the front nine.

Kevin Carrigan from Victoria, B.C., Kevin Fawcett from Toronto, Ont., and Steven Diack from Coquitlam, B.C., shot matching 4-under-par 67’s to sit at T3. All three played consistent golf through the day. Diack carded one bogey on his scorecard while Carrigan and Fawcett recorded two.

Brad Phelps and defending champion Garrett Rank are three strokes off the leader after they both finished at 3 under par. Rank, who has won the event in each of the last three years, registered seven birdies throughout the day but struggled on the first and 10th hole where he tallied a double-bogey on each, his only two holes over par.

Phelps, a 52-year-old from Saskatoon, Sask., leads the over-40 Mid-Master division by one stroke. Chris Henri from Beaconsfield, Que., sits in second at 2 under par, and Todd Fanning from Winnipeg, Man., holds onto third after his 1-under par 70.

Defending champion Team Ontario leads the inter-provincial competition largely due to Fitzsimmons’ low-round of the day. Fellow teammates Dave Bunker (Brampton, Ont.) and David Lang (Toronto, Ont.) have Ontario at the top of the leaderboard by one stroke at 3 under par.

“It’s a really cool part of this tournament,” said Fitzsimmons. “In golf there isn’t a lot of opportunity to play as a team, so getting to play in that format here is a little bit extra special. We won last year and we would love to defend but just being in contention is an honour and a joy so it will be fun to go out there and play for it tomorrow.”

Teams Manitoba and Saskatchewan are tied in second at 2 under par.