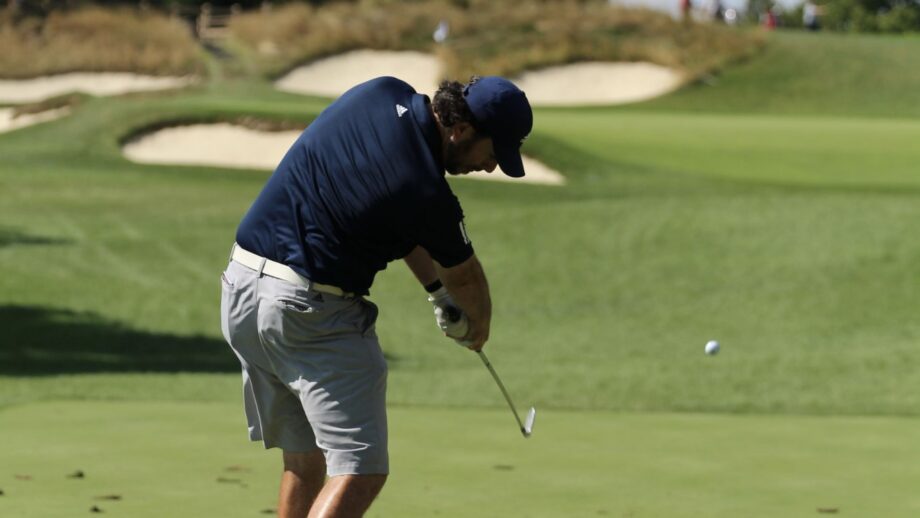 THORNHILL, Ont. – The rain came and went on Thursday at The Thornhill Club, but, as it has all week, Charles Fitzsimmons’ lead remained through three rounds of the Canadian Men’s Mid-Amateur Championship, presented by BDO.

Fitzsimmons didn’t even make it to the fairway on No. 1 before the rain started coming down. It was relentless, but so was he. Through the downpour, Fitzsimmons made a pair of birdies in his opening three holes to increase his lead to six shots in that moment. Bogeys on Nos. 6 and 7 offset the early birdies to re-establish the four-stroke lead that the defending champion will hold going into tomorrow’s final round.

“It brought me back to being a kid out there. No one would want to play, so I had the course to myself,” said Fitzsimmons of the heavy rain in the early stages of his round.

“I really just tried to hit a golf shot, then try to hit another and was fortunate enough to hit a couple of good ones and make some putts. Honestly, kind of a little surprised that it got off to such a good start in such tough conditions but that was nice.”

Fitzsimmons, who was born in North York but has since relocated to London, Ont., not only has an advantage on the golf course going into the final 18 holes, but off the playing surface as well. The Western University alumnus graduated with a PhD in Sports Psychology and now works as a Mental Performance Coach. If there’s anyone that can block out tomorrow’s noise, Fitzsimmons is as safe a bet as they come.

“It’s been a huge part of my development as a player and what’s helped me to get better over time and to be bale to stay calm and focused under pressure so that I can get some wins and play well in these bigger events,” said the 2021 Men’s Mid-Am champion. “There’s nothing that makes me happier than be able to coach somebody and help them to play better, but obviously it helps my own game too so it’s kind of nice that way.”

Fitzsimmons shot an even-par 70 on the day and will vie for his second consecutive Canadian Men’s Mid-Amateur Championship on Friday.

Ryan Tsang and Curtis Markusson are the men chasing him. Tsang also carded an even-par 70 to remain four strokes back of the lead. The Thornhill, Ont., native got out to a bumpy start, making bogeys on holes 1 and 6, but Tsang found his mojo with birdies on 8 and 9.

As for his game plan tomorrow: “Just go out there and have fun.”

Markusson is five off the lead following a one-over par 71. The Gimli, Man., native posted two bogeys, one birdie and 15 pars in the third round. He, too, is just looking to have fun on the golf course tomorrow.
“I just prefer playing golf and the competition. It’s such a good atmosphere and there’s so many great players across the country […] If you can’t get excited for this in the game of golf at any time of day, you shouldn’t be golfing,” Markusson laughed.

The 40-year-old holds a four-stroke advantage in the Men’s Mid-Master division – a subdivision for players 40 and over. Mike Dinner is in second place, four strokes shy of Markusson’s lead.

On Wednesday, Team Ontario claimed the R. Bruce Forbes Trophy as champions of the Interprovincial Team competition. The victory marked the sixth consecutive provincial title for Ontario and 16th in the 29-year history of the team event.