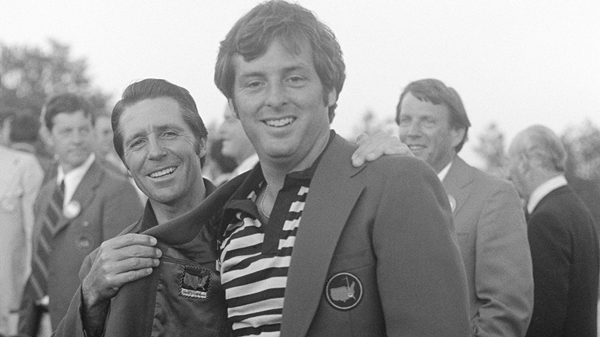 AUGUSTA, Ga. – Billy Horschel won the Zurich Classic two weeks after the Masters last year, and thus became first on the list of players who earned their first trip to Augusta National. He just had no idea how long the list would grow.

Throw in the six amateurs, and then cap it off with Matt Jones being the last man in by winning the Shell Houston Open. The final tally is a record 24 players who will be making their debut at the Masters this year.

This is the 78th Masters, and only three players have won on their maiden voyage around this pristine golf course. Horton Smith won the first one in 1934. Gene Sarazen won the following year. It then took 45 years to get another Masters rookie in a green jacket – Fuzzy Zoeller in 1979.

There hasn’t been another one since, although the odds have never been better. Nearly 25 percent of the field is at the Masters for the first time.

Smith gets overlooked as a “Masters rookie,” and rightly so. All 72 players were rookies that year.

Here are the best five performances by players at Augusta National for the first time:

5. JASON DAY: He qualified for his first Masters by winning the Byron Nelson Championship for his first PGA Tour victory. The 23-year-old Australian was loaded with far more talent than victories to show for it, but he took a liking to a course that had never produced a champion from Down Under.

Day shot an 8-under 64 in the second round to get within two shots of the lead, and the only reason he didn’t get more attention was because 21-year-old Rory McIlroy was ahead of him. And they played in the same group, along with 22-year-old Rickie Fowler.

This was in 2011, the year McIlroy lost a four-shot lead with an 80 in the final round. Day hung around to the very end, and when he finished with a birdie for a 68, he was tied for the clubhouse lead with Adam Scott. Behind them was Charl Schwartzel, who took the outright lead with a birdie on the 17th and rolled in his fourth straight birdie on the final hole for a two-shot win. Day went home with a silver medal as a runner-up in his debut.

4. HUSTON, WE HAVE A PROBLEM: John Huston became known as the most feared player in golf – on Tuesday in money games with the pros. He won seven times on the PGA Tour, the first won coming in 1990 that made him eligible for his first Masters.

He opened with a 66, leaving him two shots behind Mike Donald. And while he followed with a 74 in the second round, he still trailed by only two shots. Huston had a 68 in the third round to stay within two shots of former Masters champion Raymond Floyd. Better yet, he was in the final group, giving him an excellent chance to become the first Masters rookie to win since Zoeller.

Alas, Huston fell back with a 75 on the final round. The winner came from back in the pack – Nick Faldo made up four shots on Floyd with six holes to play, and then won on the second extra hole when Floyd hit into the water on No. 11. Huston tied for third in his debut. He played the Masters 12 more times and never had a higher finish.

3. POHL’S CLOSE CALL: Dan Pohl made an inauspicious debut in 1982 when he opened with a pair of 75s. That would have missed the cut at most other Masters, but not this one. Conditions were tough by rain the opening two days, leading to the highest cut (10-over 154) in Masters history. He was still six shots behind.

Pohl, the longest hitter on tour, followed with a 67 on Saturday on the strength of back-to-back eagles on the 13th and 14th holes, though he still was six shots out of the lead. And even with the low score of the final round – another 67 – it didn’t appear to do much good. Craig Stadler was six shots ahead going to the back nine until the Walrus started dropping shots. Stadler wound up with a 73, and suddenly Pohl was in a sudden-death playoff.

It didn’t last long. Pohl missed a 6-foot par putt on the first playoff hole at No. 10, and Stadler made par to win. Pohl had to settle for silver.

2. THE SHOT HEARD `ROUND THE WORLD: Gene Sarazen hit the shot that put the Masters on the map and won at Augusta National in his first try. But being a “rookie” at the Masters wasn’t that big of a deal. The Augusta National Invitation Tournament was only in its second year. Sarazen missed the inaugural event, and this “rookie” had already won six majors, the first of them 13 years earlier.

Still, what he did that day cannot be overlooked and will not be forgotten. Trailing by three shots, he hit 4-wood into the hole for an albatross on the par-5 15th hole to force a playoff with Craig Wood. In the only 36-hole playoff in Masters history, Sarazen shot even-par 144 to win by five.

He remains the only player to complete the career Grand Slam at Augusta National.

1. FUZZY’S FIRST MAJOR: Zoeller whistled his way into the record books as the first major champion to win a sudden-death playoff. The Masters went away from the traditional 18-hole playoff in 1979, and it turned out to be memorable.

Much like Pohl, Zoeller was never really in the picture until someone’s misfortune on the back nine. Zoeller was six shots behind going into the last round and closed with a 70. It looked like it would be a good debut at the Masters, nothing more. That was before Ed Sneed, who had a three-shot lead with three holes to play, finished with three bogeys.

That led to a three-man playoff among Sneed, Zoeller and former Masters champion Tom Watson. On the second playoff hole, Zoeller knocked in a birdie putt and leapt into the air to celebrate.

Was it a big deal for a Masters rookie to win?

“They didn’t bring up until the next year,” Zoeller said.