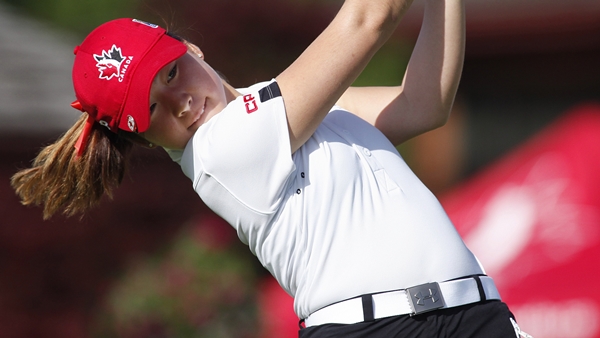 LANCASTER, Pa. – Five Canadians defeated their opponents on Wednesday to advance to the second round of match play at the Women’s Western National Amateur Championship at Lancaster Country Club.

Among the Canadians to advance were three Team Canada Development Squad members – Naomi Ko of Victoria, Sabrine Garrison of Calgary and Taylor Kim of Surrey, B.C.

Garrison, who is committed to the University of Minnesota, took down Jennifer Elsholz of Grand Rapids, Mich., 4&2.

Delaney Howson, a Newmarket, Ont. native, defeated Erica Herr of New Pope, Pa., 1up. The senior at Murray State carded a 9-over 153 (73-80) through the two qualifying stroke-play rounds.

Canadian Josée Doyon marks the final Canadian to advance in the championship flight, beating Evelyn Dole of Raleigh, N.C., 5 and 4. Doyon, also a sophomore at Kent State, finished at 3-over par (73-74) to sit in a tie for fourth. She was joined by Development Squad member Valérie Tanguay of St-Hyacinthe, Qué., who later fell in the first round of match play.

In total, there were 17 Canadians in the field at the Women’s Western National Amateur Championship.