Five things about the man behind the RBC Canadian Open 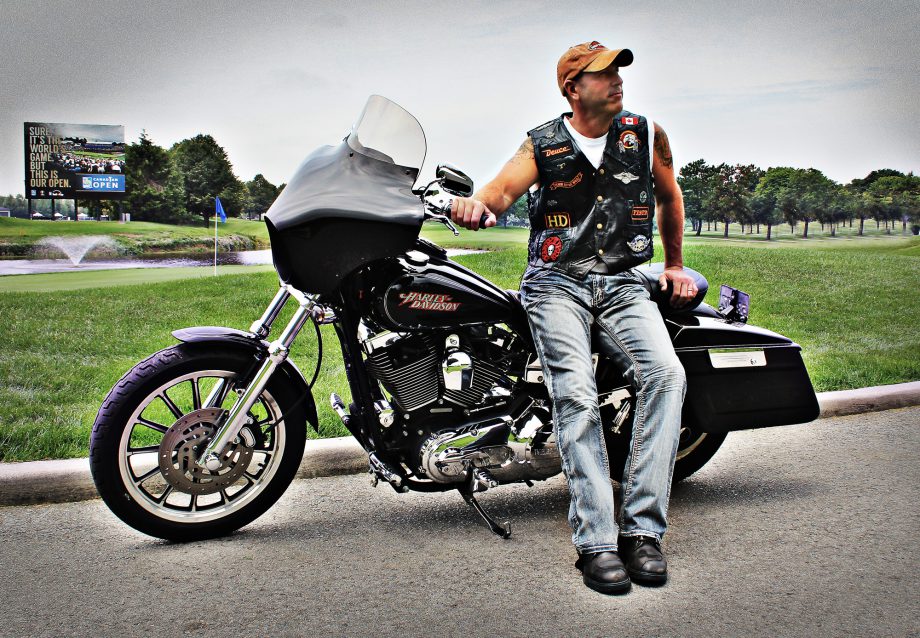 Brent McLaughlin with his Harley-Davidson at the Glen Abbey Golf Course. The site of the 2015 RBC Canadian Open.

After 22 years, Bill Paul, the veteran tournament director of the RBC Canadian Open stepped aside from his day-to-day job and into a more strategic role as Chief Championship Officer.

Golf Canada didn’t have to look very far to find his replacement. In fact, Brent McLaughlin was only one office away.

But the long-time lead of the rules department at Golf Canada – and the tournament director at the Canadian Pacific Women’s Open – is far from your usual championship leader.

Here are five things you need to know about the 44-year-old McLaughlin.

His ice-fishing hut is parked at Glen Abbey

Dubbed the Heisenberg II – because of it’s glaring resemblance to the trailer from the critically-acclaimed television show Breaking Bad – McLaughlin’s ice-fishing hut is actually an old trailer he bought from Kijiji and fixed up.

The grounds crew at Glen Abbey lets him park it in the maintenance yard during the summer months before he takes it up to Cook’s Bay and Lake Simcoe for the winter.

“It has a woodstove in it, three fishing holes… it’s hilarious. I originally stored it in the parking lot of Glen Abbey,” he says. “Being from (Sault Ste. Marie) I love the outdoors. I love fishing and hunting. I just can’t shake it.”

At the conclusion of the CP Women’s Open, McLaughlin will be taking a well-deserved vacation.

But not just any vacation.

McLaughlin, who says he has driven across Canada a few times, will be riding his Harley-Davidson motorcycle back to Oakville from Vancouver, through the U.S. The ride will take 10-12 days, and admits he has a bunch of landmarks chosen to stop at.

However, he says he hasn’t arranged hotels in every city. He’ll be bringing a tent with him, just in case, on his self-described, “hippie trip.”

“I’ve always love the bad-boy image of the Harley, and I’m a true-and-true Harley guy now. I love the sound of it,” he explains. “I’ve got my bike shipped out (to Vancouver) and I’ll just take my time getting home.”

He went on tour with the Barenaked Ladies

In the early-1990s, the Barenaked Ladies were one of Canada’s biggest bands. Their song “If I had $1,000,000” was burning up the charts and they were about to embark on their first cross-country tour, called the “Mr. Rockin’s All You Can Eat Salad Bar” Tour.

And, McLaughlin would be along for the ride.

“I was shipping lumber at Lansing Build-All and my roommate was scheduled to go on this tour as a roadie with another buddy. In the 11th hour, literally two days before it started, he bailed. (My roommate) was looking for someone, so I said I was in,” McLaughlin explains. We picked up tour buses in Victoria and went all the way to Newfoundland and back to Toronto. It was an unbelievable trip.”

Six months prior, McLaughlin began dating a girl. He told her he was going on this tour and left. But, she was waiting for him when he got back.

That girl is now his wife.

He has a great Justin Leonard story

In 1996, Justin Leonard was playing in the Canadian Open as a young PGA Tour pro. Although “kind of a nobody” according to McLaughlin, he could not have been nicer, and the Texan and McLaughlin ran into each other a few times at Glen Abbey.

The next year, Leonard won the British Open and went on to be, well, Justin Leonard.

Fast-forward to 2015, and Leonard is still as nice as ever to McLaughlin, but for a slightly different reason.

“When I first took over this job, I got an email from Leonard saying he needed a larger rental vehicle because he’s bringing his family,” McLaughlin says, laughing. “He doesn’t know me from a hole in the ground, but I’m going to tell him that story. He’s emailed me, he congratulated me on the job, but he still needs that van.”

McLaughlin knows he can lean on more than two decades of knowledge from Bill Paul, and, he’s been thrilled to receive two pieces of advice that he’s constantly coming back to.

Firstly, he was told to enjoy the experience.

“It’s such a unique job,” he says. “There’s just one tournament director for the RBC Canadian Open, so even when you’re worried about how many people can park on site, or, the fact that the washrooms are overflowing in The Valley, you have to take a step back and realize you have a great job.”

“You get all consumed with (the tournament) and you have to have a life,” McLaughlin explains. “Steal a little time away with your family and enjoy the summer time, because it’s so short. I’m trying to live by that.”