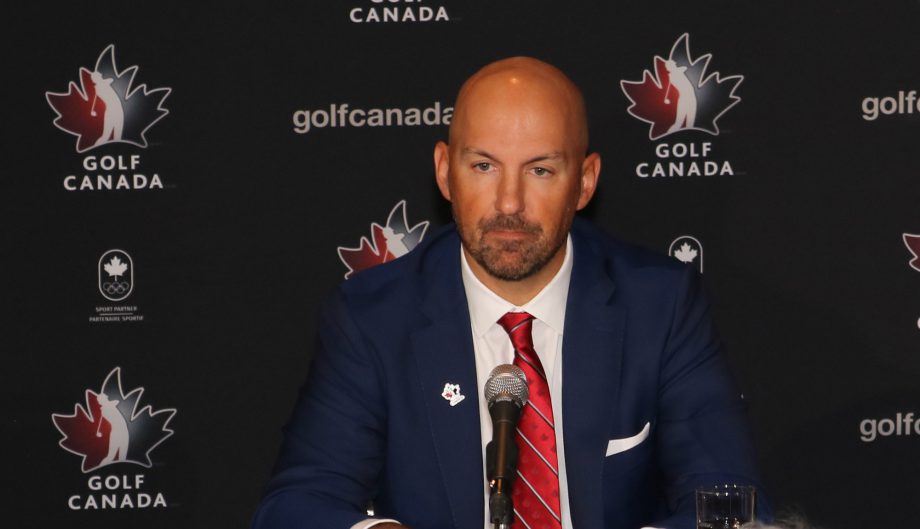 His top priority is making improvements to the two showcase events on the federation’s calendar: the RBC Canadian Open and the Canadian Pacific Women’s Open.

“We’re going to really evolve these into next-level championships,” Applebaum said Tuesday after his introduction at the Canadian Golf Hall of Fame.

Applebaum, who will formally assume the role July 10, said that membership development and global community relationships will be a key focus along with the national championships.

“What we can do is put on world-class, phenomenal, premium, fan-friendly events that are going to drive people and that includes giving great service to the players,” he said. “Making them put the Canadian Opens on their schedule and getting them out here.”

Getting the men’s players to circle the Canadian stop on their calendars will be one of his biggest challenges.

The tournament has been held the week after the British Open in recent years and some golfers are not crazy about making the overseas trip right after the major even though charter flights have been available.

Applebaum said he’s looking forward to building on the many positives the event has to offer.

“It’s the third oldest event on Tour,” he said. “It’s a national championship. It has great history. It has great Canadian content and it’s had great champions. I think we’ll continue to look at all the things that fans want.

The tournament did land then-world No. 1 Jason Day and then-No. 2 Dustin Johnson last year, but only four players in the top 20 were in the 156-man field. The women’s championship – which is on a tour with fewer events – locked in all top-10 players and 46 of the top 50.

The men’s event, which used to be played in early September, could get a deeper field with a more favourable spot on the calendar. Keeping the communication lines open would only help in that regard.

“I don’t envy the task of either of the commissioners,” Applebaum said. “I think circuit structure and the calendar is one of the hardest things to manage. I know in our conversations with the PGA, they’ve got 46 dates that they’re trying to manage and it’s a challenge. I can tell you that we look at all of our options. When availability comes our way, we’ll have robust discussions with our partners and figure it out.

“Obviously we’ve had a number of different opportunities in past Canadian Opens where they’ve been date-wise. We’re going to look at what this new world looks like.”

Another item on his plate will be the decision on whether to move the championships around the country. Glen Abbey Golf Club in Oakville, Ont., will host the July 27-30 men’s event and the women’s tournament – featuring Canadian star Brooke Henderson – will be played Aug. 24-27 at the Ottawa Hunt and Golf Club.

“I think there’s real merits on both sides,” Applebaum said. “We’ve got to weigh them and we’ll look at it.”

Glen Abbey is expected to host again next year and Regina is a favourite to host the 2018 women’s event. On the sponsorship front, RBC is signed on through 2023 and Canadian Pacific is signed through next year.

“Laurence Applebaum’s hiring marks the beginning of a new era for Golf Canada,” said Golf Canada board of directors president Roland Deveau. “After an extensive search, Laurence stood out because of his previous leadership in sports organizations, proven senior management skills and visionary thinking.

“His drive and energy are infectious. We are so pleased to repatriate this outstanding Canadian leader to take Golf Canada forward.”

Applebaum has spent over 20 years in various sport management roles in North America and Europe.

At the WTA, he oversaw a variety of strategic and operational initiatives. Applebaum was responsible for the day-to-day operations of the circuit, including tournament operations, player relations and development, along with new business development.

Applebaum said he was most proud of helping spearhead the evolution of the WTA Finals into a significant year-end championship in Singapore.

“The benefit of that kind of experience is really what I’m hoping to bring to this role,” he said. “Being able to take great events and make them even better.”