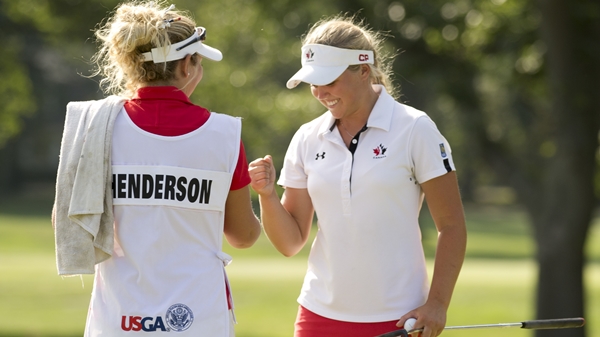 GLEN COVE, N.Y. -Four of the five Canadians who qualified for match play at the 2014 US Women’s Amateur at Nassau Country Club advanced to the round of 32 Wednesday.

The lone Canadian to fall Wednesday was Anne-Catherine Tanguay of Quebec City. She lost 2& 1 to Portland Rosen of Sugar Land, Texas.

“It was just smooth sailing,” said Abe, second last year in the U.S. Girls’ Junior. “I didn’t get too up or too down. Just kind of steady the whole time.”

The 17-year-old Wu, from Diamond Bar, California, became the first top seed to fall in the first round since co-medalist Jihee Kim in 2011.

“I wasn’t hitting it solid,” Wu said. “After I lost the third hole, it kind of got in my head. I tried to come back so quickly, and it just didn’t work out. Overall, just a terrible day.”