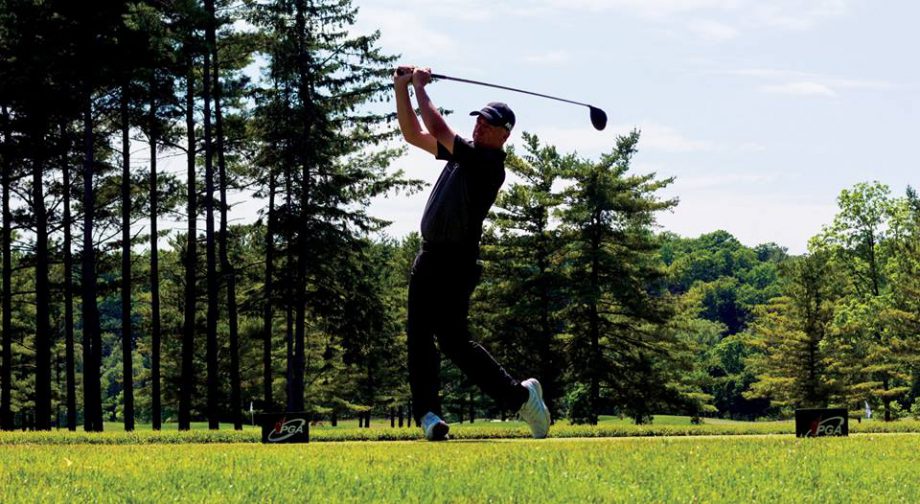 And then there were four.

Marc Hurtubise, Nick Kenney, Jean-Philip Cornellier and Bryn Parry punched their ticket to the final day of the PGA Championship of Canada sponsored by Mr. Lube and presented by TaylorMade-adidas Golf.

The National Golf Club of Canada’s Nick Kenney secured the George Knudson bracket, with Jean-Philip Cornellier winning the Moe Norman bracket. Kenney and Corneiller will square off in the semi-final match at 7:45 a.m

The two winners will play in the championship’s final match Thursday afternoon, with the winner taking home the historic P.D. Ross Trophy and the first place prize of $15,000.

“I’ve never actually thought about being a national champion,” Kenney admitted after his afternoon victory or last year’s champion Marc-Etienne Bussieres. “It’s one of those things you try not to think about, but it’d be really cool to win.”

Corneiller, the 26-year-old from Club de Golf Knowlton, said his goal for the week just to make sure he was still playing by the time Thursday rolled around.

“My goal for the week was to play on Thursday, so I’m really excited about being able to play two great matches tomorrow,” he said. “I’ve been really happy with how I’ve been playing for the past three days and I expect the same tomorrow.”

Of the four players remaining, only Parry has been this deep in the championship (winning in 2013 at Magna Golf Club and reaching the semi-finals last year at Victoria Golf Club). The 45-year-old feels that should work to his advantage.

“Each year in this championship I play more matches so, I’m playing more golf and figuring how things work,” Parry said.

By virtue of his stellar play this week at Deer Ridge, Parry will jump to the top of the player rankings when they’re released Friday and earn the exemption into the RBC Canadian Open.

“It is obviously very cool and another exciting thing to look forward to this summer,” Parry said. “I’m really enjoying my equipment with TaylorMade having a special thing going with their irons, wedges and ball,” he said, adding, “and if the ball does what it’s supposed to do for those four days, it could be a lot of fun.”