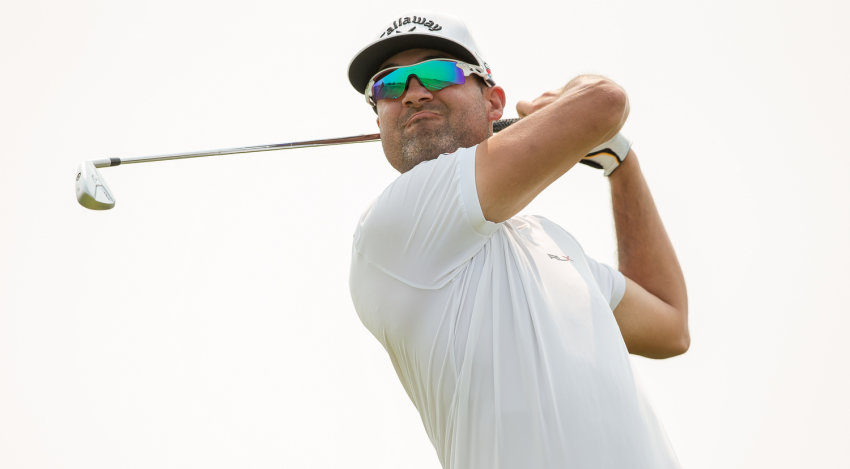 Ottawa, Ont. – Ohio’s Ross Beal, Michigan’s Matt Harmon, and North Carolina’s Zack Byrd shared the clubhouse lead at 6-under when play was suspended due to inclement weather at 6:51 p.m. on Thursday, with co-leader and Mackenzie Tour rookie Mookie DeMoss still to finish the 18th hole.

Byrd, the only of the three clubhouse leaders to have played in the rain, was teeing off on his final hole when heavy rain began.

“We stood on the ninth tee and saw it coming and all just quick-hit it off the tee box,” Byrd said. “My bag was just behind the eighth green with my rain gear, my umbrella, and everything so I hit and took off running and it started dumping after that.”

After struggling with the ninth hole in both of his practice rounds, Byrd went on to birdie it in the rain with a 25-foot putt to tie the leaders with a round of 65. He attributes the last-second birdie to a caddy’s familiar eye.

“Luckily, I’ve got a caddie who really knows the golf course,” Byrd said. “It was so dark that it was almost impossible to read putts and he said ‘trust me’ and he was spot on with the read.”

Harmon is making his first start on the Mackenzie Tour since finishing second on the 2014 Order of Merit and starting the season on the Web.com Tour. Harmon carded four birdies and an eagle for a bogey-free round. Despite the strong first round, the 30-year-old felt he didn’t play his best golf on Thursday

“I was pretty fourtunate to be bogey-free,” Harmon said of his return, adding that he was forced to make a bunker shot for par on the par-3 14th hole.

As with Byrd, Harmon credited the familiarity with the course, having played at Hylands Golf Club and finished T25 last season, as the biggest factor towards a successful round.

“Just playing on courses I know is the biggest thing. I’ve spent three half-seasons up on the Web.com Tour and really haven’t played the same course more than one time. Getting out here, it’s familiar and that helps a lot,” said Harmon, last year’s Cape Breton Celtic Classic presented by PC Financial Champion.

Beal, fresh off victory in Tuesday’s official pro-am with an 8-under 63, was confident he could control the course despite the wind.

“It got pretty blustery but luckily I’m long enough that the down wind holes played short, and into the wind I hit almost every fairway so I was able to control it into the greens,” Beal said following his round of 65.

“Including this one, I’ve won the past four Pro-Ams I’ve played in and I’ve made one cut out of those four,” Beal said, shaking his head.

For the rest of the field, Hylands Golf Club presented some challenges to open this year’s National Capital Open to Support Our Troops, with rain threatening and gusty winds throughout the day.

“It was very tough, very windy. You can’t miss fairways or greens out here, the wind definitely made it harder,” said Order of Merit leader J.J. Spaun of the conditions. “If you’re expecting it to play like how it did yesterday, you’re in for a rude awakening.”

Still, Spaun was pleased with how he managed it.

“You’ve just got to kind of accept it and fight through it,” Spaun said following a round of 67. “I’m very happy with where I’m sitting right now. Anything under par I feel like is really good out there.”

After leaving a 15-foot eagle putt on his final hole of the day short for the solo lead, Beal hopes the weather will calm down so that he can attack the course over the weekend.

“If it’s less windy I don’t see any reason why I can’t just fire at everything even more tomorrow.”

First, DeMoss – among 18 players yet to finish – will have to resume his opening round from the 18th fairway.

The first round will resume at 7:30 a.m., pushing tee times for the second round back 15 minutes.