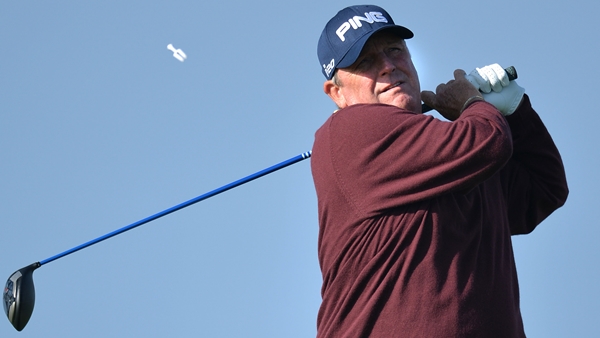 BIRMINGHAM, Ala. – The Champions Tour players put on long-sleeved pullovers and tried to figure out which way the wind was swirling from hole to hole. They left Shoal Creek with little separation at the top.

Jay Haas, Mark Calcavecchia, Olin Browne and Chien Soon Lu shared the first-round lead at 3-under 69 on Thursday in the Regions Tradition, the first of the 50-and-over tour’s five majors. Nine others were within two strokes of the lead.

With windy, unseasonably cool conditions, it was the highest score for first-round leaders at the Tradition since three players tied at 3-under in 1990 at Desert Mountain Club in Arizona. The course absorbed more than an inch of rain heading into Thursday and the players were allowed to lift, clean and place their golf balls.

The Tradition hasn’t been so tightly bunched in the top spot after the first round since a seven-way tie in 2008 and the average score was about two strokes higher than last year’s first round.

“With all the trees and the valley and everything, you get a lot of swirling winds and you just have to be extra careful and think it out and then hit the shot that you’re planning to hit, which I did most of the time.”

Calcavecchia birdied three of the final nine holes and came within a whisker of a fourth and the solo lead on No. 18.

“When it was about 10 feet short, I didn’t think it could miss,” he said. “It was just dead center the whole way and the last couple of feet, it was still in the middle of the hole and it just dribbled just a shade to the right and singed the right lip.

“That would have been nice to walk that one in to end the day. Those are the ones that make the rest of the day go by a little bit better, dinner taste a little better.”

Haas capped a run of three straight birdies with a 50-foot putt on the 12th hole to move to 5 under. He finished with six birdies and had bogeys on three holes, including two of the next four after the long putt.

The sun actually shone much of the day but the wind and wet course did make for some challenges.

“There was no roll in the fairways,” Calcavecchia said. “We had to play lift and place. The ball was just caked with mud every time you picked it up in the fairway. The wind was very tricky.”

The native of Taiwan has two second-places in the Tradition, 2010 in Oregon and 2012 at Shoal Creek.

Calcavecchia’s history at the scenic course has been up and down, though he says it’s his favorite stop on the Champions Tour.

He lost a six-shot lead in 2011, including a pair of weekend double bogeys on No. 12. This time he avoided a bogey on his most troublesome hole but tweaked a rib on a shot from the fairway bunker.

“The 12th hole is not my favorite out here, I’ll tell you that right now,” Calcavecchia said.

Browne’s only win on the 50-and-over circuit came in the 2011 U.S. Senior Open Championship. He missed five months of last season with a stress fracture in his back, playing only 14 events.

Browne, who tied for second at the ACE Group Classic in February, had a bogey-free round with his final birdie on No. 17.

“It was blustery and it was difficult to gauge, but my caddie and I did a decent job,” Browne said.

Steve Elkington, Willie Wood and Corey Pavin were one stroke off the lead at 70 and six players were two shots back.

Canada’s Rod Spittle carded an even-par 72 Thursday. He was tied for 14th with nine players including Tom Watson, Colin Montgomerie and David Frost, among others.