Four tied after opening round of Canadian Women’s Amateur Championship 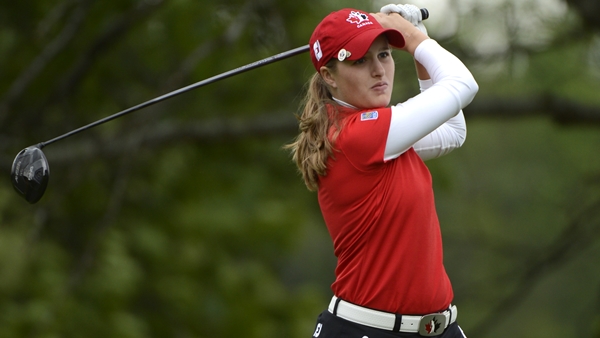 Woodstock, Ont.  – Liz Breed of Waynesboro, Pa., Augusta James of Bath, Ont., Mexico’s Gabriela Lopez and Su-Hyun Oh of Australia fired 4-under 67’s to share top spot on the leaderboard after the opening round of the Canadian Women’s Amateur Championship at Craigowan Golf and Country Club.  During Tuesday’s afternoon draw, Team Canada’s Augusta James closed with a back-nine 3-under 32 to share the clubhouse lead alongside Liz Breed who posted the low round of the morning flight.“I’m excited to have shot a number like this and basically I always try to tell myself at every tournament try to shoot one better each day,” James said. “That’s my goal for the rest of the week and hopefully I come out on top.”Playing a few groups behind James, Lopez and Oh’s pairing finished tied for the lead after rolling in par putts on the par-3 9th hole.  Lopez, last year’s third place finisher, held the outright lead for the majority of her closing nine before a late bogey on her 17th hole, the par-4 8th. “It’s always fun to come to a tournament where you’ve played well and you know that you’re expectations are high and you have the chance to win,” said Lopez, the No. 11 ranked amateur in the world. “It feels very good being tied for the lead and I just need to keep believing in myself and trusting my golf shots and my swing.”Kelowna, B.C. native Megan Osland also posted a strong opening round after a bogey-free 3-under 68 on Tuesday morning. Osland currently sits in solo fifth, while defending champion Brooke Henderson, 16, of Smiths Falls, Ont. posted a 1-under 70 to share seventh place. Team Canada’s Henderson rebounded from a 2-over front-nine with a 3-under 32 closing nine that was highlighted by an eagle on the par-5 4th hole. In the Inter-Provincial Team Competition that is conducted over the first 36 holes of the championship, Team Ontario’s contingent of Team Canada’s James, Henderson and Brittany Marchand of Orangeville, Ont. sit seven strokes ahead of Team Alberta at 5-under par. In the Mid-Amateur division (25+), Christina Proteau of Port Alberni, B.C. will look to pick up her fourth consecutive title after opening with a 2-over 73. Proteau currently leads by five strokes over Marion Reid of Etobicoke, Ont. who holds a three-stroke lead in the Mid-Master (40+) division after a 7-over 78. Starting times, post-round results, full field list, and live scoring are available here.