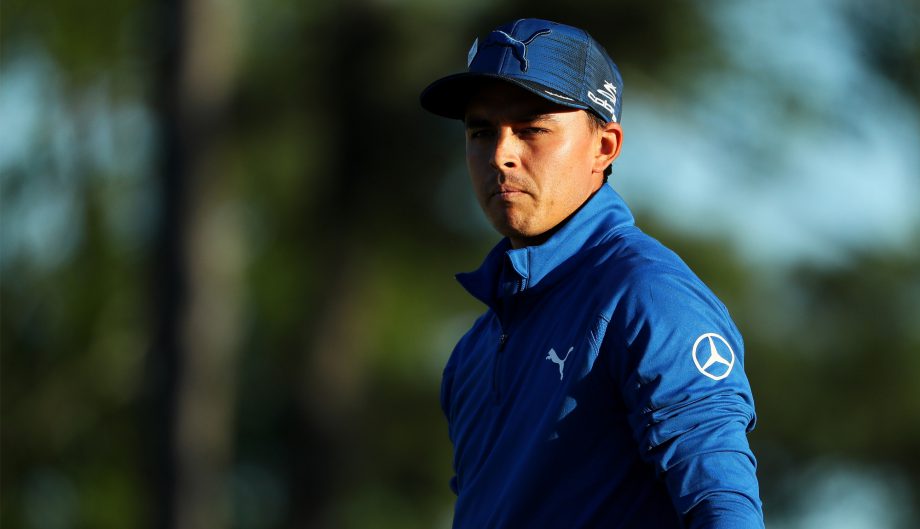 AUGUSTA, Ga. – Rickie Fowler finally got to the top of the leaderboard in a major and didn’t have much of a view.

Right next to him was Charley Hoffman, playing in the final group going into the weekend at the Masters for the second time in three years. Sergio Garcia knew the score when no one else did and had his first share of the lead in his 19th time playing Augusta National. Not to be overlooked was Thomas Pieters of Belgium, a real threat to become the first Masters rookie since 1979 to leave with a green jacket.

And those were just the co-leaders in the largest 36-hole logjam at the Masters in 44 years.

Even more daunting were the players lined up behind them – Jordan Spieth and Phil Mickelson among four Masters champions, Olympic gold medallist Justin Rose, Spanish rookie sensation Jon Rahm and Rory McIlroy, missing only this major for the career Grand Slam.

“It’s going to be a fun weekend,” Fowler said after a 5-under 67, the best score of another wind-swept day. “We’re going to see a lot of good golf and battle it out.”

Friday’s second round at #themasters was the survival of the fittest. pic.twitter.com/JherxTvXu5

Two days of survival gives way to a shootout among some of golf’s biggest stars.

In conditions just as demanding as the opening round, Fowler holed out a bunker shot for eagle on his second hole, quickly moved into the lead pack and secured his spot in a share of the lead with a tricky birdie putt from the collar of the 16th green.

Garcia, playing his 70th consecutive major and still looking for that first victory to define an otherwise strong career, wasn’t the least bit bothered by seeing the wrong score for him on a leaderboard behind the 13th green when a penalty for a lost ball was mistakenly attributed to him. He bounced back from a bogey behind the 13th green by firing a 3-iron across the water and into the wind to the 15th green for a two-putt birdie. He shot a 69.

Pieters moved to the top by hitting off the pine straw and over a tributary of Rae’s Creek to 12 feet for eagle on No. 13, and he followed with a wedge to 4 feet for birdie on the 14th to shoot 68. Hoffman lost his four-shot lead in 11 holes before he steadied himself the rest of the way and limited the damage to a 75.

Hoffman will be in the final group going into the weekend at the Masters for the second time in three years, with one big difference. Two years ago, Hoffman was five shots behind Spieth in what turned out to be a runaway for the young Texan.

This time, the Masters appears to be up for grabs.

The wind began to subside as the pines cast long shadows across the course late in the afternoon, and the forecast is close to perfection for the rest of the weekend, with mild temperatures and hardly any wind.

That won’t make it any less exhausting, not with 15 players separated by only five shots.

The last time there was a four-way tie for the lead at the halfway point of the Masters was in 1973, when Bob Dickson, Gay Brewer, J.C. Snead and Tommy Aaron were tied at 3-under 141. Aaron went on to claim his only green jacket.

Hoffman had a chance to keep his distance until he ran off five bogeys in a six-hole stretch, including a three-putt from 4 feet at the par-5 eighth.

“Everybody was talking about how great that round was yesterday, but it was pretty easy to me – making putts, hitting good, solid golf shots,” Hoffman said. “Today I think I sort of felt how hard it was for everybody else in this wind when you got out of position.”

Garcia only really got out of position on the scoreboard.

His tee shot on No. 10 clipped a tree and shot back into the fairway, while Shane Lowry also hit a tree and couldn’t find it. Both were wearing dark sweaters during the search, and the scorers were confused with who lost the ball. Garcia made bogey, dropping him to 3 under. A few holes later, however, it was changed to 1 under on the scoreboard, and Garcia pointed to the board behind the 13th green.

It eventually was fixed, though that was of no concern to the 37-year-old Spaniard.

“The most important thing is I knew where I stood,” Garcia said.

And he knows the score that everyone talks about – 70 majors as a pro without a victory, and enough close calls to make him wonder if he’ll ever get it done.

Spieth, undone by a quadruple bogey in the opening round, started slowly and finished strong with birdies on the 16th and 18th for a 69. Adam Scott, the 2013 Masters champion, also had a 69 and joined Spieth at 144.

“We’re in a position now where we can go out there and win this thing and certainly make a run,” Spieth said. “So that right there just kind of gives me chills, because after yesterday I was really disappointed in being 10 shots off the lead.”

And right there with them was Mickelson, who can become the oldest Masters champion. The 46-year-old Mickelson was one shot behind until he sputtered down the stretch with three bogeys and two par saves over his last five holes for a 73.

Him and everyone else.