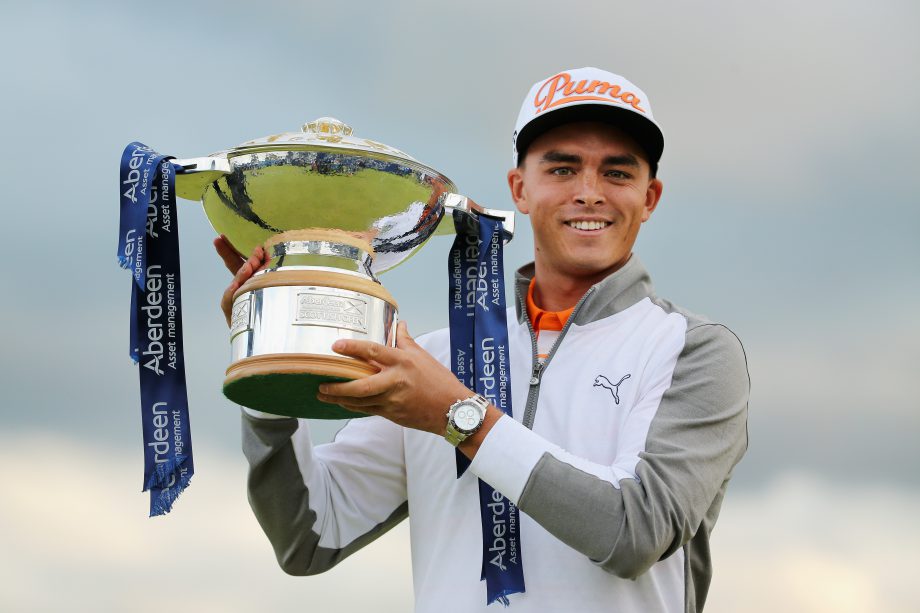 GULLANE, Scotland – Rickie Fowler birdied three of his last four holes to overhaul fellow American Matt Kuchar and win the Scottish Open by one shot on Sunday for his second victory of the year.

Kuchar was on the practice range, preparing for a playoff, when Fowler sent his approach on No. 18 to within 18 inches. He tapped in the putt for a 2-under 68 – the same score as Kuchar – and an overall 12-under 268.

It is the fourth title of Fowler’s professional career, coming two months after winning The Players Championship, and the second outside the United States after the Korea Open in 2011. And his links game looks in good shape ahead of next week’s British Open at St. Andrews.

Raphael Jacquelin of France birdied the last hole for 70 to tie for second place with Kuchar, and claim one of three British Open places on offer along with third-round leader Daniel Brooks, the No. 528-ranked Englishman, and Sweden’s Rikard Karlberg.

Fowler took the outright lead in the tournament for the first time with his last shot of the week, from the middle of the 18th fairway.

After knocking in the putt, he doffed his cap and acknowledged the crowd. But he had to wait for the final pairing of Jacquelin and Brooks to play the last before really celebrating.

Jacquelin was the only one who could force a playoff but he needed an eagle 2. That almost happened, with his approach spinning back to a foot from the cup.

It was a successful return to Scotland for Fowler and Kuchar, who were last here for the American team’s loss to Europe in the Ryder Cup in September 2014.

“I think we’ll be OK,” Fowler said when asked how Kuchar will feel about being edged out. “He did it to me at The Players (in 2012). Maybe this was payback.”

Fowler decided to alter his schedule and play the Scottish Open the week before British Open for the first time last year, after seeing Phil Mickelson win both events in 2013.

He is halfway toward emulating his compatriot two years on.

Marc Warren of Scotland shot 64 to finish in a three-way tie for fourth on 10 under, with Eddie Pepperell (69) and Joost Luiten (70).

Brooks started the final round with a one-stroke lead over Jacquelin, but his driving was poor and he was forced to scramble for a 73 that still clinched him an Open berth for the first time. He was tied for seventh with Luke Donald (66) and Ross Fisher (68).