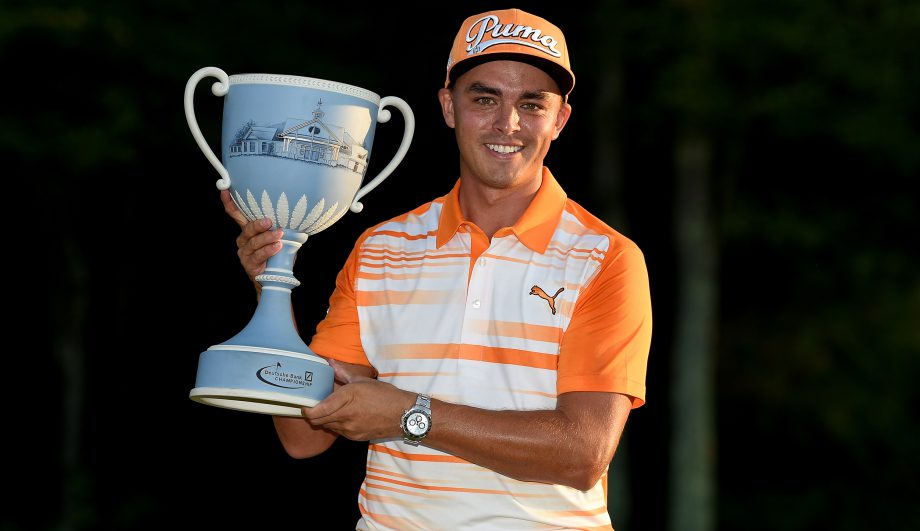 NORTON, Mass. – Rickie Fowler delivered all the right shots Monday at the Deutsche Bank Championship, and then he delivered some champagne.

He stood near the wood railing overlooking a dozen rows of reporters, hoisting an empty bottle in one hand and a microphone in the other.

He certainly showed he is capable after a tense duel with Henrik Stenson at the TPC Boston.

Trailing by three shots early on the back nine, Fowler rolled in a 40-foot putt on the 14th hole to pull within one and then seized control when Stenson hit a towering tee shot that came down short and into the water for double bogey on the par-3 16th.

That combination sent Fowler to another big win. He closed with a 3-under 68 for a one-shot victory that assured him of a spot in the top five at the Tour Championship and a clear shot at the $10 million bonus in the FedEx Cup.

Fowler won The Players Championship in a three-hole playoff in May. He won the Scottish Open with three birdies on the last four holes.

“Being in those positions before, I definitely felt very calm out there,” he said. “I knew what I was trying to do. Knew what I had to do. And was very much ready to do it.”

Fowler moved to No. 5 in the world, not quite part of the “Big Three” this year of Jordan Spieth, Rory McIlroy and Jason Day, but perhaps on the cusp of it.

“They’ve clearly played the best out of anyone over the past few months to couple of years,” Fowler said. “So I’m trying to be a small fourth thrown in there. But there’s a lot of other really good young players playing well right now, as well.”

Stenson was a runner-up in a FedEx Cup playoff event for the second straight week, and this one figures to sting.

He holed a 15-foot birdie putt on No. 10 for a three-shot lead. And when Fowler hit a bold 5-wood to 10 feet for birdie on No. 11 for a two-shot swing, the Swede answered with a 35-foot birdie on the 12th to restore the cushion to two shots.

It all changed quickly and dramatically on the par-3 16th.

“I obviously pulled the wrong club on 16 and was trying to get the most out of a 7-iron into the wind and ballooned that one a little bit and that was the crucial mistake. Making double there was really a killer,” Stenson said. “I tried to get those two shots back or at least one to force a playoff on the last two holes and couldn’t manage to do it.”

The final hour was every bit as tense as The Players Championship in May, except instead of five players having a chance to win, this was a duel with Stenson the entire back nine. Fowler didn’t make any birdies after his long putt on the 14th, but he didn’t have to. Where he thrived was off the tee and his iron play into the greens. Swinging freely, he was never really out of position until he went just long of the green on the par-5 closing hole with his second shot.

He played it safe with a putter to 10 feet, putting pressure on Stenson to the very end.

Charley Hoffman bounced back from a 76 to close with a 67 and finish alone in third.

One of the loudest cheers was for a player who had no chance to win. William McGirt was on the verge of being eliminated from the FedEx Cup when he holed a 7-iron from the fairway on No. 17 for eagle. A par on the 18th hole allowed him to sneak into the top 70 and advance to the third playoff event north of Chicago in two weeks.

Hunter Mahan kept his streak going by closing with a 70 to tie for fourth, moving him from No. 91 to No. 52. Mahan is the only player who has never missed a FedEx Cup playoff event since this series began in 2007. Jerry Kelly made birdie on the last hole for a 72 to get into the top 70. Keegan Bradley also got in.

Two other players imploded on the back nine to end their season.

There were no changes to the Presidents Cup, though Matt Jones of Australia squandered a great chance. He only needed third place to make the International team, but he made two double bogeys in three holes to start the back nine and finished in a five-way tie for fourth.

Stenson now has been runner-up four times this year without winning, and this was every bit as good a chance to win as Bay Hill.

“It’s in the right direction, for sure,” Stenson said. “Always disappointing when you can’t finish the job when you’re in good position. But you have to take the positives.”