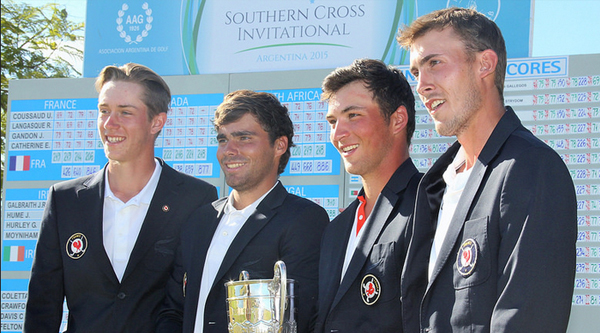 TIGRE, BUENOS AIRES, Argentina – Medalist Romain Langasque of France dominated the field at Nordelta Golf Club, finishing at 14-under par (71-69-67-67), 9 strokes ahead of runner-up Jarryd Felton of Australia to lift Team France to the come-from-behind victory.

In total, France finished comfortably in first with a combined 846 (18-under) after trailing second place Ireland (852) through 36 holes. Rounding out the podium was Australia, who held a narrow one-stroke margin over Canada through 36 holes before pulling away in the final two rounds to finish at 5-under par (859).

Canada’s Development Squad held the fourth spot at 877, fending off Argentina’s last-ditch effort on Sunday to overtake the Canucks—they finished two-back at 879.

The inaugural Southern Cross began in 1999 between Argentina, Australia, New Zealand and South Africa. Since then, the event combined with the Four Nations and Ten Nations Cup to include the larger field it hosts today.

With one man down today, Team Canada holds on to 4th place at Southern Cross Invite in Argentina pic.twitter.com/zAdHtC7Fbb