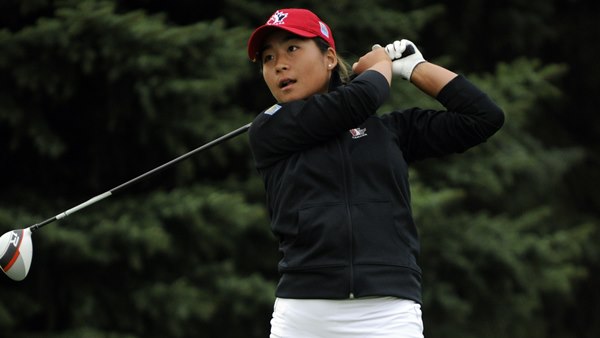 WILLIAMSBURG, Va. – France’s Joanna Klatten had five birdies in a six-hole stretch and finished with a 6-under 65 on Thursday to take the first-round lead in the LPGA Tour’s Kingsmill Championship.

Klatten birdied Nos. 3-6 and 8 and closed with a par on No. 9 on Kingsmill Resort’s River Course.

“I made a few bombs, which is nice, but it was just solid,” Klatten said. “I’ve been playing pretty good lately. Just struggled with the putting the last few tournaments, but today it was fixed.

“I definitely had luck on my side today. I had good breaks and it feels good. Lately, it felt the other way around, but I knew that it always evens out. Today, it definitely did.”

The 30-year-old former Georgia State player is winless in 27 career events on the LPGA Tour.

“This is one of my favorite courses all year,” Klatten said. “I feel very comfortable here. It suits my eye really well. I think you have an advantage if you’re among the long hitters.”

Morgan Pressel, Alison Lee and Pat Hurst were a stroke back, and So Yeon Ryu, Paula Creamer, Jacqui Concolino and Perrine Delacour followed at 67.

Michelle Wie withdrew because of a hip injury after a 78.

“Regrettably, I need to withdraw today due to a left hip injury that has been bothering me this week,” Wie said on Twitter.

She had a double bogey, six bogeys and one birdie.

Pressel had five birdies in a bogey-free round. Winless since 2008, she has two top-three finishes in her last four events. She was third in the ANA Inspiration and second in the Swinging Skirts LPGA Classic.

“I just played pretty steady out there today,” Pressel said. “I don’t think I hit the ball quite as well as I would’ve liked to, but made a few really good up-and-downs. Made birdie when I had the opportunity. The good up-and-downs certainly were part of the reason why I had no bogeys.”

Lee had seven birdies and two bogeys. The 20-year-old former UCLA star tied fourth in the Kia Classic in March and has three top-25 finishes in her rookie season.

“I was able to grab a couple birdies going down the stretch,” Lee said. “Especially the last four holes – I got three birdies. I’ve been putting it a lot better. That’s what I’ve struggling with the past month, like my putting. But I had a lot of good rolls today.”

The 45-year-old Hurst had a bogey-free round. She won the last of her six LPGA Tour titles in 2009.

“You got to hit the ball well out here,” Hurst said. “It’s all about the angles out here and being on the right side of the fairway and the way you come into the greens. If you’re hitting the ball good, it’s easier to put them in that spot.”