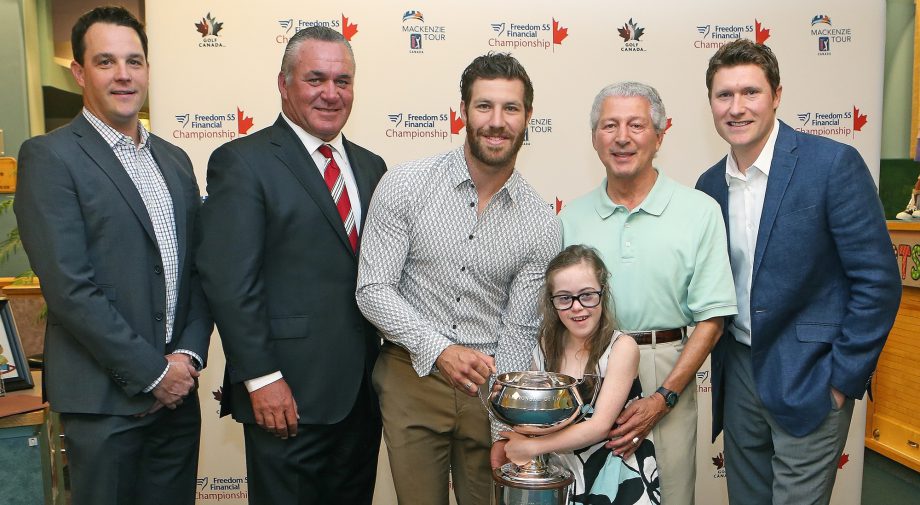 London, Ont. – Golf Canada in partnership with title sponsor Freedom 55 Financial and the Mackenzie Tour – PGA TOUR Canada confirmed today that the Thames Valley Children’s Centre (TVCC) will return as the official charitable beneficiary of the Freedom 55 Financial Championship, which will run September 12-18, 2016 at Highland Country Club in London, Ont.

Leading up to this year’s championship, a pair of community donations have been made in the name of the Freedom 55 Financial Championship to kick off the charity fundraising efforts for the season ending event on Mackenzie Tour-PGA Tour Canada.

An additional donation of $25,000 was made to the Thames Valley Children’s Centre by the Harbour Grace Foundation, a collection of companies owned and managed by Founder and Chief Executive Officer Ms. Kyle MacDonald. The company is headquartered in London, Ontario and is active in several industries, including real estate, publishing, entertainment, and manufacturing. The Harbour Grace Group is also active in multiple philanthropic endeavours, and Ms. MacDonald has a passionate interest in supporting scholarships for young Canadian students wishing to access world-class post-secondary educations.

The Mackenzie Tour also committed support to the Thames Valley Children’s Centre with a donation of $12,500 in the name of the Freedom 55 Financial Championship on behalf of Mackenzie Investments.

In 2015, more than $44,000 was raised in support of Thames Valley through various fundraising activities during the Freedom 55 Financial Championship.

Thames Valley Children’s Centre (TVCC) works to support children and their families to achieve the highest possible quality of life. TVCC serves more than 8000 children, youth and their families every year through a wide range of services provided out of the main London Centre and 15 regional office locations across Southwestern Ontario. Clients range in age from birth to 19 with services supporting a range of special needs including physical disabilities, communication disorders, developmental delays and autism spectrum disorders.

The 12th and final event on the Mackenzie Tour schedule will see the culmination of the race for Web.com Tour status at Highland Country Club. Only the top 60 players on the Order of Merit will be eligible, setting up an exciting race to the season’s final event.

As well, children aged 17 and under get in free all week without restriction at the Freedom 55 Financial Championship – download your free junior tickets here.

Volunteer and ticket information is available at www.freedom55financialchampionship.com.