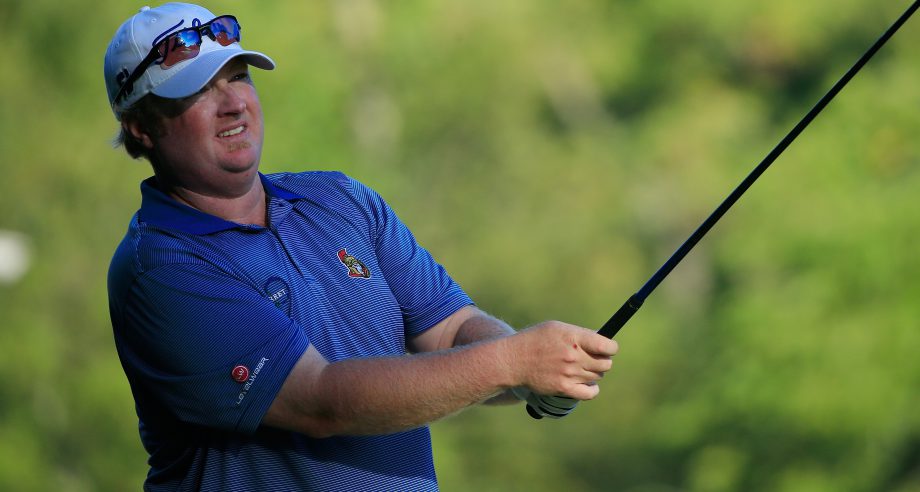 Cartagena, COL – Kevin Tway birdied the par-5 finishing hole on Saturday and jumped into the 54-hole lead at the Servientrega Championship Presented by Efecty. Tway fired a flawless 6-under 66 which put him at 11-under-par 205, one ahead of second-round leader Brad Fritsch, who got up and down for birdie on 18 to pull within a shot of Tway.

Argentina’s Jorge Fernandez-Valdes parred the final five holes, shot 2-under 70 and finds himself two off the pace in third place.

Ollie Schniederjans (66) and Timothy Madigan (67) are 8-under-par after three trips around TPC Cartagena at Karibana.

“It was definitely playing tough out there,” said Tway, about the blustery conditions. “The wind probably kicked up around hole 7. So from then on, you’ve just got to try and survive and give yourself as many opportunities as possible.”

Tway took advantage of the front nine, going out in 3-under 33. The 27-year-old from Edmond, Oklahoma knew the importance of getting off to a fast start. Through 54 holes, the back side of TPC Cartagena is playing a half-shot harder than the front.

“Everyone knows when they get to the back nine it’s going to be windy,” said Tway, who has played the second nine 5-under in three tries. “You kind of just have to pick a shot that you can see and commit to it.”

Tway has rolled the flat stick very well this week. The four-time All-American at Oklahoma State University played throughout the Midwest, “where it is windy all the time.” Those experiences have helped Tway not get discouraged on the greens when a gust comes up because he knows how to resort back to feel when standing over the ball.

“Putting is very difficult,” said Tway, who grew up in Oklahoma. “You take the wind into consideration more than usual. Sometimes you don’t even look at the break; you just kind of play what the wind is doing.”

Tway, whose favorite golf memory is caddying for his father, Bob Tway, in the Par 3 Contest at the Masters, has never led heading into the final round of a Web.com Tour event. In 2013, Tway earned his first Tour victory at the Albertsons Boise Open presented by Kraft, where he defeated Spencer Levin in a playoff. Now a veteran on Tour, the five-year pro’s strategy for Sunday is to battle the golf course instead of fending off his competition.

“You have so much to handle on the course that I’m not really going to be thinking about leading or not,” said Tway. “You’ve just got to try and hit each shot the best you can and fight the conditions.”

Fritsch struggled with the wind throughout the day. The 38-year-old Ottawa resident was forced to back off a few times when a gust would knock him off the ball. Down two on the final green, Fritsch caught a break when the wind died down for a moment. The brief lapse allowed Fritsch to drain his birdie try to stay within striking distance of Tway.

Fritsch played the first 36 holes with Tway and is familiar with his game. Knowing he can’t overpower a course like the long-hitting Tway, the Edmonton, Alberta, Canada native will try and make his move early before the flagsticks start to bend.

“Just try and get off to a real good start,” said Fritsch, who is 7-under on the opening nine this week. “The front nine is the easier nine when it’s windy and then you just try and survive on the back nine.”