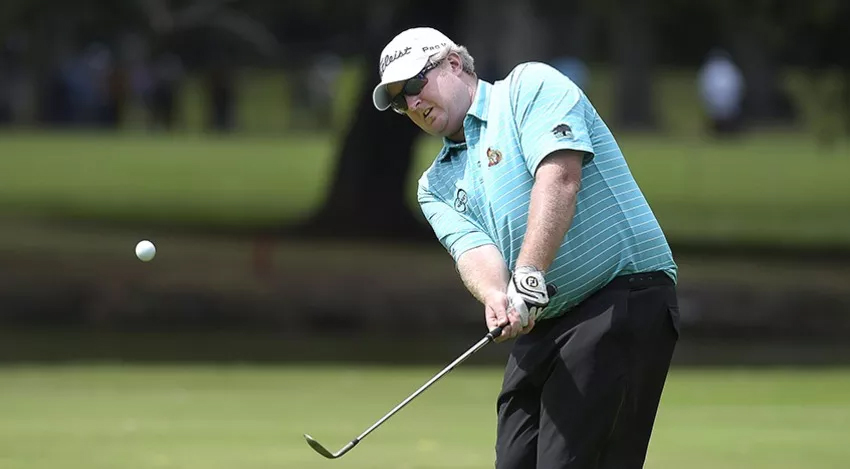 CARTAGENA, Colombia – Brad Fritsch took advantage of calm conditions at TPC Cartagena at Karibana, on Friday morning, and fired a 7-under-par 65 to move into the lead. The Canadian’s 8-under 136 total is good for a one-stroke advantage over PGA TOUR veteran Jonathan Byrd (67), and PGA TOUR Latinoamérica alum Jorge Fernandez-Valdes (68) after 36 holes of the Servientrega Championship presented by Efecty.

Jason Millard (-6), who finished No. 5 on the Mackenzie Tour – PGA TOUR Canada Order of Merit last season, and Irishman Seamus Power (-6) are two back heading into the weekend.

“Playing today in the morning was such an advantage,” said Fritsch, who teed off at 6:30 a.m. “If there was ever a good draw, this was the one.”

Starting on 10, Fritch recorded four straight pars before getting into red numbers with birdies at 14 and 15. His only blemish of the day came at the par-4, 16th where he made bogey. Fritch bounced back two holes later with a birdie at the par-5, 18th to turn in 2-under.

On his inward nine, Fritsch recorded three birdies to tie for the lead at 6-under. The 38-year-old pro cemented himself atop the leaderboard with an eagle at the par-5, eighth hole. With 210 yards from the middle of the fairway, Fritsch elected to hit a mid-iron and landed it just short of the green.

“I hit a 7-iron,” said Fritsch, who guessed his ball would carry an extra 30 yards downwind. “I just tried to one-bounce it on the green and it just missed the bunker on the left.”

The ball settled 25 feet from the cup. With some help from Kevin Tway, who hit a pitch along the same line, the Holly Springs, N.C., resident drained the putt for three, which put him 8-under for the tournament.

Fritsch is not known as a great chipper of the golf ball but was force to lean on his short game to break par in the tough conditions Thursday afternoon. The Edmonton, Alberta, native made five birdies, two bogeys and a double bogey en route to a one-under score.

“I got up and down nine or 10 times yesterday,” said Fritsch about his first-round 71. “I just had to survive yesterday and that was the goal.”

Fritsch has held at least a share of the 36-hole lead three times in 135 starts on the Web.com Tour. The 16-year pro has never won an official Tour event and relishes the chance to change that this weekend.

Byrd could not believe how limp the flags around the first hole were when he walked up onto the tee box. Playing in still conditions, the five-time Tour winner went 6-under-par in his first 14 holes. Late in the round the breeze started to pick up and Byrd closed-out his day bogey-birdie-bogey-par and signed for a 5-under score.

“Every little breath of wind you feel, you thought it was coming,” said Byrd, who was waiting for it to start howling. “We probably got the better wave and that first nine was just there for the taking.”

Fernandez-Valdes has been in contention quite a few times in his two years on Tour, most recently at last year’s Albertsons Boise Open presented by Kraft Nabisco. With two rounds left to decide a winner, the 24-year-old from Cordoba, Argentina has a chance to become the fourth Argentinian to win on Tour and first since Emiliano Grillo at the 2015 Web.com Tour Championship.

“I think all the experience is good,” said Fernandez-Valdes, who has competed in 50 Tour events entering this week. “I just got to keep doing my thing and stick to my strategy. I’m 100 percent sure that will help me this weekend.”