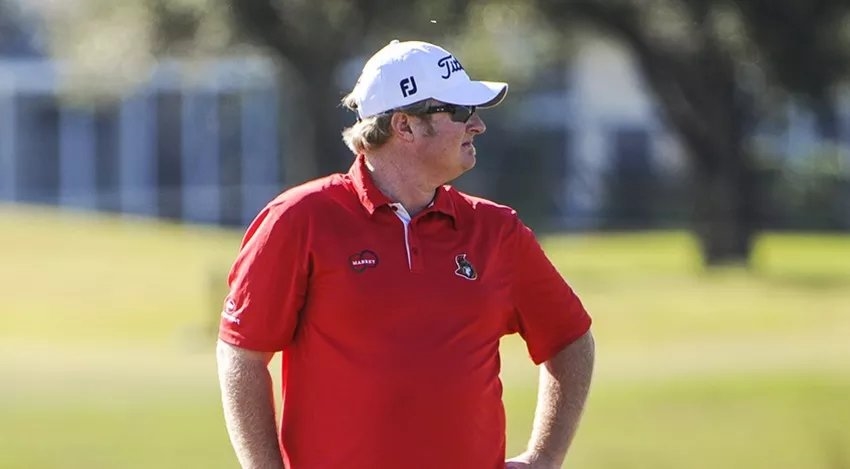 LEON, GTO, Mexico – Brad Fritsch will play in the final group on Sunday for the second straight Web.com Tour event. After a bogey on the par-4 17th, Fritsch bounce backed with a birdie on thRoyce Thompsone par-5 finishing hole for a 3-under 69. His 16-under-par 200 total puts him two clear of Wesley Bryan (71) after 54 holes of the El Bosque Mexico Championship presented by INNOVA.

Five-time PGA TOUR winner Jonathan Byrd, who recorded nine birdies in his third round, is in solo third after a sizzling 65.

Martin Flores (70) trails by five while Ollie Schniederjans (66), Mexico’s Sebastian Vazquez (67) and Brian Campbell (72) are six off the pace in a share of fifth.

“I could get used to it,” said Fritsch, who will be paired with Bryan in the final round. “There’s nowhere else I’d rather be besides in the lead. I’m going to embrace it tomorrow.”

Fritsch is riding a wave of confidence like something you would find on Oahu’s North Shore. When he arrived in Leon, the 38-year-old from Ottawa, Ontario didn’t plan on hitting many drivers around El Bosque Country Club, but things changed quickly. The Steve Newgent design is very demanding on some of the par 5s, especially the eighth and 18th, two holes that don’t fit Fritsch’s eye.

“There are a lot of things that can go wrong on those holes,” said Fritsch, who is 13-under on the par 5s this week. “Sometimes plans change when you’re swinging it well, and with confidence you can be a little more aggressive.”

Fritsch was certainly that on the par-5 18th hole. From the fairway, Fritsch chose to go for it in two and sailed his second over the green. From there, he chipped it to 5 feet and made the putt to post 16-under.

Fritsch’s day wasn’t as smooth as his scorecard appeared. He had a few breaks go his way including a nice birdie on the par-5 10th, where he drained a 20-footer after running his chip past the hole. The Campbell University graduate also made a great par-save at No. 14. Fritsch blocked his drive right behind a patch of trees and was forced to hit a low runner into the greenside bunker. He blasted his third to 5 feet and knocked in the par putt to stay at 16-under.

“Those are momentum changers,” said Fritsch.

Fritsch has put a lot of time into his game. Not only is the 16-year-pro seeing the results, others on Tour are taking notice as well.

“If we can all catch the Tiger Woods of the Web.com Tour right now,” said Byrd, who is four back heading into Sunday. “He’s playing pretty good right now.”

After the round, Fritsch wasn’t able to pinpoint one thing that’s caused this surge of good play. He believes it’s a combination of the hard work he has put in back home in Holly Springs, North Carolina, and a hot putter.

“A couple of people have asked me that,” said Fritsch. “As one area gets better, it snowballs and the rest of the game clicks.”

Bryan’s day didn’t go as he had planned. After a birdie at the 10th, he made a “boatload of pars,” eight to be precise, to close out his third round. Despite the 1-under score, the 26-year-old from Columbia, South Carolina, has a chance to earn his second Tour win on Sunday.

“Anytime you put yourself in contention, that’s mission accomplished,” said Bryan. “I’ve got to put my head down and go to work tomorrow.”