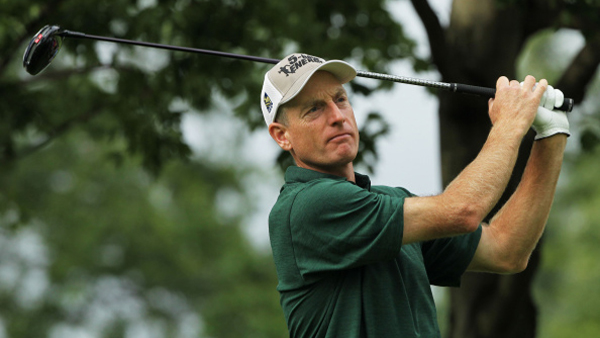 PARAMUS, N.J. — Jim Furyk was steady. Jason Day was wild. Both wound up with a share of the lead Saturday at The Barclays.

Day lost his golf ball in a mound of high grass and took double bogey on the par-5 13th, the third-easiest hole at Ridgewood. He also took four shots to get down from a bunker on the par-5 17th for a bogey. But the Australian made enough birdies for a 3-under 68.

The final round of his opening FedEx Cup playoff event was shaping up as a shootout, with 15 players separated by three shots.

Hunter Mahan was tied for the lead until his approach went right of the green on the 18th and he took bogey for a 68. He was one shot behind. Matt Kuchar, who won The Barclays the last time it was at Ridgewood in 2010, was among seven players two shots behind.

The group at 6-under 207 included Ernie Els and Erik Compton.

Missing from the mix – but not entirely out of the picture – was Rory McIlroy. The British Open and PGA champion made an early move until he was slowed by a pair of bogeys around the turn. He had a 70 and was five shots behind in his bid for a fourth straight victory.

Adam Scott failed to keep pace. Tied for the lead going in a cloudy Saturday, the defending Barclays champion made only one birdie in a round of 75 and left him five shots out of the lead.

At least he’s still playing. Phil Mickelson missed the 54-hole cut, which is in effect when more than 78 players make the 36-hole cut. For the second straight day, Mickelson hit his tee shot onto the terrace of a grandstand left of the fifth green. This time, he saved par.

That was the lone highlight, however. Mickelson shot a 75 and headed home. It was unclear if he would play the Deutsche Bank Championship next week, which might end his season if he doesn’t stay among the top 70 eligible for the BMW Championship.

Just about everyone else at Ridgewood is still in the running, or so it seems.

“It’s going to be interesting tomorrow,” Day said, who is trying to make the most out of what seems like a lost year because of a thumb injury.

Day injured his thumb while winning the Match Play Championship in February, costing him tournaments and momentum. But a big run now that he’s healthy could help him salvage his season.

The focus figures to be on Furyk, who has gone nearly four years without a victory. Since winning the Tour Championship at the end of 2010, Furyk has had at least a share of the 54-hole lead seven times and has failed to convert.

His last chance was a month ago in the Canadian Open, where Tim Clark beat him by a shot. He also missed out on two majors, the PGA Championship last year at Oak Hill and the U.S. Open in 2012 at Olympic Club.

Furyk said only a few guys had a realistic chance in Canada. This is different.

“Going to be a little bit of a shootout tomorrow,” he said. “Excited about one more opportunity.”

Mahan has gone more than two years without winning. Not only is he trying to extend his streak of reaching the Tour Championship every year, Mahan still is auditioning for Tom Watson as a potential captain’s pick for the Ryder Cup. He took the outright lead with a 15-foot birdie putt on the par-3 15th hole, but he lost a good birdie chance with a poor wedge into the 17th, and then flared his approach to the right on the 18th.

Even so, he’s right there with a chance to win and make a big statement.

And so is everyone else. Even as Scott went sliding backward, Cameron Tringale held his own. It was the first time Tringale had a share of the lead going into the weekend, and he bounced back from an early bogey to stay in the hunt.

Morgan Hoffman, at No. 124 the second-to-last man into the playoffs, had the best round Saturday with a bogey-free 66 and was in the group at 7-under 206. Kevin Chappell had a two-shot lead with he drove the green at No. 5 and converted a long two-putt for birdie. He didn’t make another birdie and dropped three shots for a 71 and was among those two shots behind.

Canada’s David Hearn is tied for 30th after carding 69 in the third round.