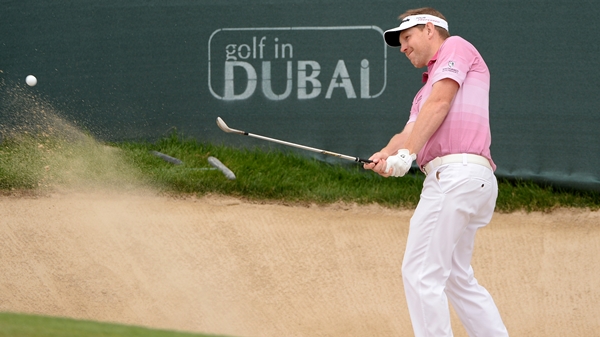 DUBAI, United Arab Emirates – Defending champion Stephen Gallacher had seven birdies and an eagle on the back nine Saturday to surge past Rory McIlroy and take a two-shot lead into the final round of the Dubai Desert Classic.

Gallacher equaled the European Tour record for the lowest nine-hole score with an inward 28 for a 9-under 63. That gave him a 16-under total of 200, with McIlroy in second after 69. Tiger Woods was 11 shots back after a 70.

“This is the best back nine I’ve had in my career by far,” said Gallacher, who started the day four shots behind McIlroy. “So to get myself back into contention when I needed to, and given the stature of this tournament, it feels good.”

Gallacher started with seven straight pars before a bogey on the eighth. But he birdied the next four holes before an eagle on the par-5 13th, where he hit a 7-iron to within three inches with his second shot. After another par on the next hole, he finished with four straight birdies.

“I struggled at the start and played the first four holes a bit ropey,” the Scot said. “But I then hit a beautiful drive and 7-iron (at the ninth) to about 3 foot, and from then on I never missed a shot.”

The Desert Classic is celebrating its 25th anniversary, and Gallacher now has a chance to become the first person to win back-to-back titles at the event. McIlroy earned his first European Tour victory here in 2009 and is still very much in the hunt despite battling food poisoning during the second round on Friday. McIlroy, who had his lowest score in three years with a 63 in the opening round, mixed three birdies and an eagle with two bogeys on Saturday.

“My stomach is better today, still not 100 percent but it’s better than it was yesterday,” McIlroy said. “I feel like I can catch him (Gallacher) up tomorrow. I don’t really want to focus on what he’s doing – try to focus on my own thing.”

Woods, who won here in 2006 and 2008, failed to get back in contention after a disappointing day on the greens. The top-ranked American had two bogeys and four birdies but missed a number of opportunities to pull closer.

“I only hit a couple of bad shots, (but) missed a ton of putts,” said Woods, who was in a tie for 37th. “Really hit it good but just threw away a lot of shots.”

Thorbjoern Olesen of Denmark shot a 65 to sit tied for third with Brooks Koepka of the United States, another two shots behind Gallacher. Race to Dubai winner Henrik Stenson fell out of contention with a 75 that included two double bogeys and left him 12 shots back.