GAO announces 2016 Board of Directors at AGM 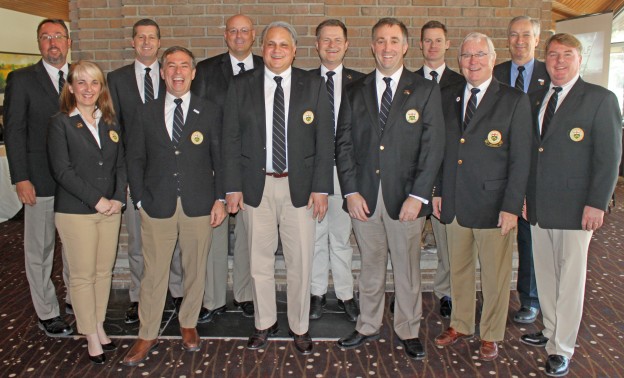 TORONTO — The Golf Association of Ontario (GAO) held its Annual General Meeting January 23, at Weston Golf & Country Club in Toronto. At the AGM, the 2016 Board of Directors was announced along with President and Vice President.

Returning in 2016 as President is Chris Osborne (Mississaugua G&CC) who becomes just the second president to serve a second term, the first being Past President Jim King (Westmount G&CC). Vice President for 2016 will be John Gallinger (Meadowbrook G&CC).

“It is an honour returning as GAO President for 2016,” said Osborne. “There are a number of important initiatives the association is involved with for the upcoming year including: our grassroots Barrie Initiative, Strategic Plan launch, continued work with Golf Canada on a new membership model and the World Junior Girls Championship to name a few.”

Also, three board members will be leaving after serving their terms.  The outgoing Board members are Alan Trivett (Glencarin GC), John Turner (GAO Public Player) and Jim King, who remains as Past President but is a non-voting Board member.

“I am pleased to welcome new board members Tim Cain, Howard Atkinson and Jason Harris while thanking departing members Jim King, John Turner and Alan Trivett for their dedication and friendship. Executive Director Mike Kelly and his staff have a clear mandate and I look forward to supporting them in these efforts. Sincere gratitude goes out to our volunteers, partners, athletes and participants, without them the GAO would not exist,” added Osborne.