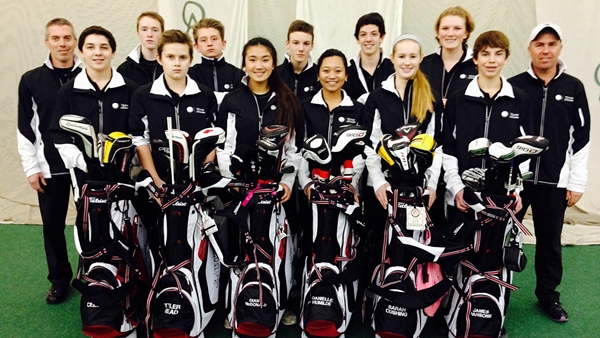 UXBRIDGE, Ont. — The Golf Association of Ontario (GAO) has announced the formation of three regional junior teams comprised of some of the best under 17 athletes in the province, a first for the association.

The GAO Team Ontario program was formerly was made up of a under 19 and under 17 team, now the provincial team features the 12 best under 19 athletes, regardless of age, while three regional teams in the Ottawa, York and Waterloo regions have been set up for an additional 36 male and female athletes under the age of 17. Twelve players will comprise each regional squad.

The teams were created in the Fall of 2013, based on combines held in the three regions. Each region features a head coach and a strength and conditioning coach to help the athletes train during the winter months.

“The GAO is thrilled to be expanding the pool of talented athletes and coaches in Ontario and the opportunity to enhance our support to members clubs and families in all parts of this great province,” said GAO Managing Director, Sport Mike Kelly. “As we inch closer to golf’s return to the Olympic program in 2016 and 2015 Pan-Para Pan-Am Games in Toronto, investments like these will clear the path for podium performances in the near future, hopefully paved in gold.”

The program will run from November to March and is comprised of 11 three-hour training sessions – approximately two per month. The teams will conclude the program with a five-day training camp and Regional Team Competition during March Break in Myrtle Beach, South Carolina.

Team Ottawa is made up of athletes from Ottawa and surrounding area stretching from Almonte to Kingston. The team is led by Head Coach Adam Holden, a PGA Canada and PGA Australia Class ‘A’ Professional.  Holden is in his 12th year coaching at the Kevin Haime Golf School in Kanata. Allen Hicks is the team’s strength and condition coach. He brings more than 20-years of experience as a physiotherapist and strength coach.

The York team pulls together athletes from the Toronto area as far east as Peterborough and the Oakville area in the west. They are coached PGA of Canada Class ‘A’ Professional Jeff Overholt. Overholt has worked with Team Ontario in the past and is the Head Coach of the Toronto North Junior Golf Development Centre.  He was named 2013 Coach of the Year by the PGA of Ontario. Kathryn Robinson is the team’s strength and condition coach. Robinson is currently the Assistant Strength and Conditioning Specialist at York University.

Athletes on Team York  are:

The Team Waterloo region includes Kitchener-Waterloo and everything south and west to the U.S. boarder. Mike Martz, PGA Class ‘A’ Professional, is the Head Coach for this team. He has more than 25 years of experience. Most recently Mike has become Certified as a Coach for New Competitors and trained as a Coach for Developing Competitors with the PGA of Canada and Golf Canada. The team’s strength and conditioning coach is Angella Lee. She is currently the strength and conditioning coach of the Whistle Bear Junior Team in Cambridge.

The athletes on the team are: