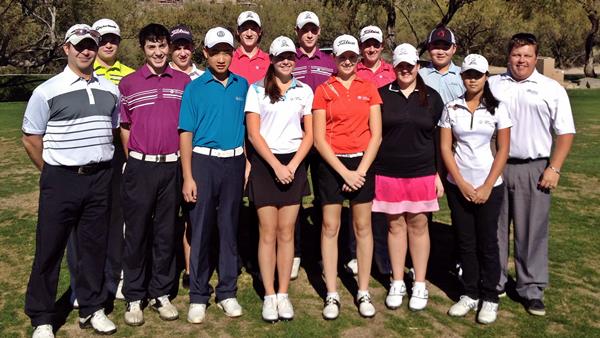 UXBRIDGE, Ont— The Golf Association of Ontario (GAO) has announced the 12-players and four coaches who will comprise Team Ontario for 2014. The team, which began its selection process in late September, is currently in the training portion of their program as they prepare for the start of the season in May with the Junior Spring Classic.

The GAO made changes to the program this year by creating just one provincial U19 team as opposed to the combined U19 and U17 teams in the past. Now, the best golfers in Ontario will be on the provincial team, while three regional feeder teams have been set up for an additional 36 players.

“It is a big shift for us from last year having 20 players on one team to having a provincial team and regional teams,” explained GAO Manager of Sport Performance Mary Ann Hayward. “We have selected the best players in the province that all have a realistic chance to move on to the national team,”

Joining the players are four coaches. Reggie Millage, was named the GAO’s Head Provincial Coach in November and has been working with the team since the fall. Millage is a Class ‘A’ PGA of Canada professional who continues to play competitively. Joining Millage are Mental Skills Coach Judy Goss, Strength and Conditioning Coach Jordan Foley and Athletic Therapist Andrew Hoermann.

“This is a very talented young group of players,” added Hayward. “We are trying to keep the momentum going from last year where we put two boys on the National Team. Hopefully we’ll place more players on the team for 2015.”

The team has already attended one training camp in Arizona and will travel back there in February for their second. Ten of the team members will play in Can-Am matches in Myrtle Beach during March Break before they all attend a final spring camp in Ontario.