Garcia contends again at a major, but doubts linger 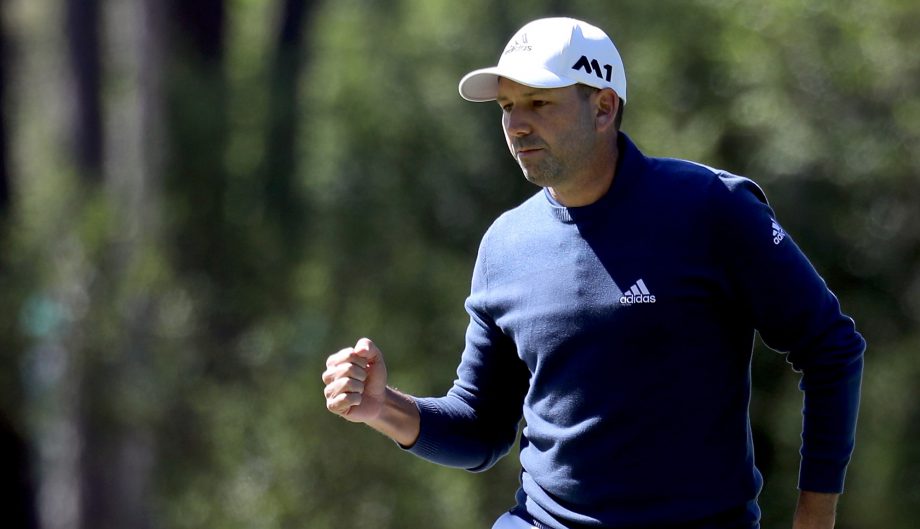 AUGUSTA, Ga. – Sergio Garcia is learning to accept life as it comes, to not get too upset when things don’t go his way.

Except when one is trying to finally win a major championship that should’ve been in the trophy case years ago.

Garcia has played magnificently over his first two rounds at Augusta National – a bogey-free performance in the face of howling winds Thursday, a 3-under 69 in conditions that were still quite challenging Friday – yet there’s still a sense he has no idea what it takes to win one of golf’s biggest events.

He’ll head to the weekend with a chance to finally stamp himself as one of the greats.

But he already seems to be steeling himself for the inevitable failure.

“Having a chance is the best thing,” Garcia said, before adding, almost as an afterthought, “and winning it, I’m sure, it’s amazing.”

He talked of how fortunate he’s been to play in 70 consecutive majors, a remarkable accomplishment indeed. But it’s not what a player should be harping on when, once again, he’s in position to win one.

“I don’t even know how many there are, but so many majors in a row and giving myself a lot of chances to win them,” Garcia said, “that for me is already a win.”

Maybe in his mind.

That sort of attitude is a big reason why he’s managed to finish in the top 10 of the majors a staggering 22 times without even once coming away with a green jacket or a claret jug or a Wanamaker Trophy or that unnamed silver prize they give to the U.S. Open champion.

He’s probably the most talented player – of any era – to miss out on one of the titles that transform a good career into greatness.

“If we can put the cherry on top,” Garcia said, his follow-up delivered with not a hint of urgency, “that would be even better.”

Can you ever imagine Ben Hogan or Jack Nicklaus or Tiger Woods saying something like that in the prime of their careers?

If there’s any hope for Garcia, at least he sounds a bit more positive than he did at this same place five years ago. After shooting himself into contention the first two days, he fell off the board with a 75 in the third round.

In a brutal self-assessment, he declared to Spanish reporters: “I’m not good enough. In 13 years, I’ve come to the conclusion that I need to play for second or third place.”

After finishing up the next day, tied for 12th and an afterthought, Garcia was asked if he really meant what he said or had just gotten caught up in the frustration of the moment.

He didn’t back down.

“Do you think I lie when I talk?” Garcia shot back. “Everything I say, I say it because I feel it. If I didn’t mean it, I couldn’t stand here and lie like a lot of the guys. If I felt like I could win, I would do it. Unfortunately at the moment, unless I get really lucky in one of the weeks, I can’t really play much better than I played this week and I’m going to finish 13th or 15th.”

He’s 37 now, hardly over the hill but his head and beard now tinged with a bit of grey. Certainly, he’s no longer a vivacious teenager bounding up the fairway after pulling off a remarkable shot from behind a tree at Medinah, a runner-up to Woods in a memorable PGA Championship that everyone figured was a mere delaying of the inevitable.

Back in 1999, it would’ve been impossible to find anyone who doubted that Garcia would someday be a major champion. The only question seemed to be how many titles he would win.

Mark O’Meara holds the record for playing in the most Masters (15) before finally picking up his first victory.

This is Garcia’s 19th appearance at Augusta National.

“Things have definitely changed,” he said. “I think I’m a little bit calmer now. I think that I’m working on trying to accept things which can happen here and can happen anywhere. It’s part of golf. It’s not easy. It’s much easier to say than to do it. But that’s the challenge we always have, you know, making sure that you accept the bad moments or the bad breaks with the good ones, and kind of move on.”

To his credit, Garcia didn’t flinch when a scoring error briefly showed that he made triple-bogey at the 10th instead of a bogey.

He finished at 4-under 140, tied for the lead with three others midway through the tournament.

Afterward, Garcia was asked again about that 2012 meltdown, when he seemed resigned to a fate of never winning the big one.

He tried to sound more optimistic.

“I probably didn’t accept things as well as I should have,” Garcia said. “I’ve shown myself many times after that, that I can contend and I can truly feel like I can win – not only one, but more than one.”

That’s the way he needs to be thinking.

He just didn’t sound all the persuasive.