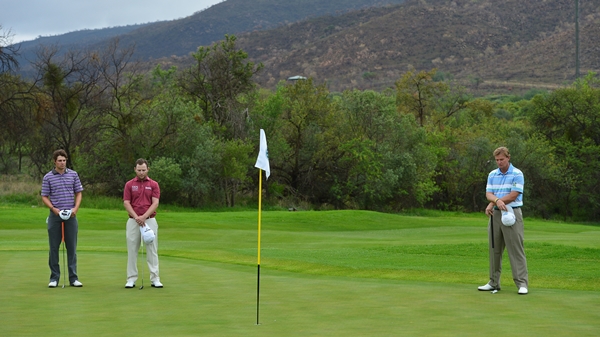 SUN CITY, South Africa – The birdie celebrations were muted and the crowd a little quiet all though Friday.

Gary Player cried on the tee before an early-morning round under grey skies and Ernie Els remembered the photo he has of himself and Nelson Mandela on his desk back at home in Florida.

Jamie Donaldson, wearing a black ribbon like all the players, emerged from the emotional day to go to 11 under and hold a three-shot lead over Ryan Moore and Henrik Stenson.

The 30-man field spent around nine hours out on the course to make up for lost time when the first round was halted for lightning a day earlier. Donaldson had seven birdies and a bogey in a second-round 66 to go with his opening 67, with the Welshman saying he played “aggressive but not daft.”

Moore had a round-leading 65 having finished up a 71 in the first round in the morning for a share of second at 8 under with Stenson. The Swede moved back into contention with a 67 at the end of the second day.

Thomas Bjorn and defending champion Martin Kaymer were tied for fourth another shot back on 7 under. Sergio Garcia had led after the first round before slipping down to a share of ninth with a 73.

Perhaps struggling with the emotions, Els and the rest of the South Africans failed to shine, with Charl Schwartzel the leading home player on 6 under, five off the lead. Els has gone 75, 71 in the first two rounds.

In the early morning, the players had stood with their caddies, some with caps removed, for a moment’s silence for Mandela before the first round restarted. Flags drooped at half-mast around the Gary Player Country Club. A hooter sounded to start the brief moment of reflection on the life of the beloved anti-apartheid leader.

One of South Africa’s first sporting heroes under Mandela’s presidency, four-time major winner Els had walked out of the players’ lounge a little after 6:30 a.m. to talk to reporters and share some of his precious memories of the time he spent with Mandela. Els said that since about 1996 and well into his old age, Mandela used to call the golfer every time he won a tournament.

“They were special times and the little time we had together was very special. He was just the most amazing person I have ever met,” Els said.

Player, South Africa’s most successful golfer and whose career so often clashed with South Africa’s dark years of apartheid, said he and three friends had prayed and then cried together over Mandela’s passing before playing a casual round first thing in the morning before the field went out.

“We all had a tear in our eyes, but it’s also a day of celebration because he’d want us to celebrate,” Player said. “And we’ve got to celebrate for what he actually gave this country.”