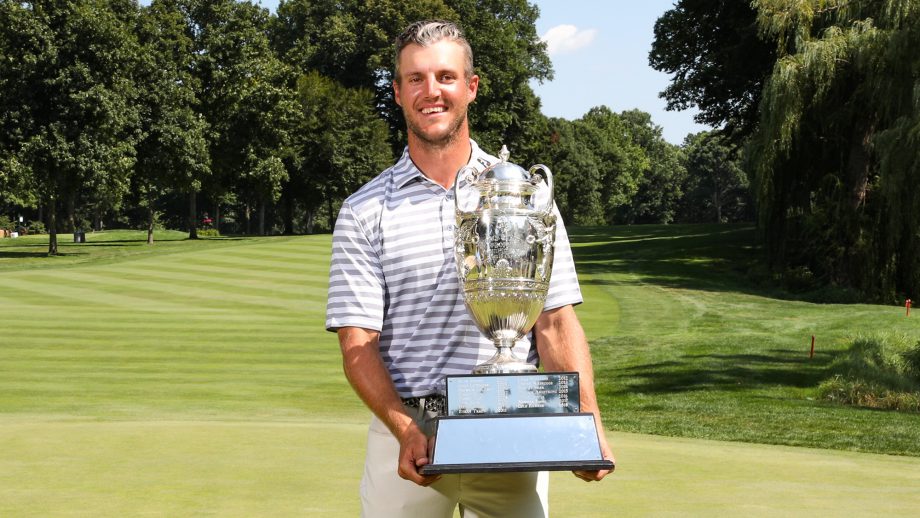 The 31-year-old Rank, an NHL referee, earned the George R. Thorne Trophy with a 3 and 2 victory over Daniel Wetterich, of Cincinnati, Ohio. The last mid-amateur to win the Western Amateur was Danny Green in 1997 at The Point, which was hosting the tournament this week for the first time since 2008.

“This is the end of a dream week,” said the Team Canada alumnus.

Rank, who finished fifth at 6 under in stroke play on Thursday, trailed in all four of his matches. He was 1 down after five in the final, but took the lead with a birdie at No. 7. Rank went 2 up after making a birdie on the ninth.

Wetterich answered with a birdie at No. 10, but Rank took control with back-to-back birdies at Nos. 14-15 to go 3 up. He parred the 16th to end the match.

“The front was back and forth, and it was fun,” said Wetterich, who graduated from Ohio State in the spring. “He just made a lot of putts, and he wouldn’t give me any wiggle room.”

A native of Elmira, Ontario, Rank played golf and hockey growing up and earned scholarships in both sports to University of Waterloo in Ontario. After being diagnosed with testicular cancer in his second year of college, he quit hockey and focused on golf.

In 2012, Rank was the runner-up to Nathan Smith at the U.S. Mid-Amateur at Conway Farms Golf Club in Lake Forest, Illinois.

“I’ve had a lot of close calls in big events,” Rank said. “To finally break through is huge. I’m a big believer in the more you put yourself under pressure you learn something every time. I relied on that.”

The win gives Rank an exemption into next year’s Evans Scholars Invitational at The Glen Club in Glenview, Illinois. Wetterich also received an invitation into the Korn Ferry Tour event.

“I’m really excited about how I played,” Wetterich said. “Overall, I’m really content with the week, and I will build on what I did [Saturday] going forward.”

Rank is the second Canadian champion – Jim Nelford won the tournament in 1977 at The Point. He’s the first international winner since Danny Lee in 2008.

“I know how important and cool this is in amateur golf,” Rank said. “It hasn’t sunk in yet, and I’m sure I’ll be even more proud when it does.”

After playing in the Canadian Mid-Amateur Championship on Aug. 20-23, Rank reports to NHL training camp Sept. 9. Even following a win at the Western Amateur, among the most prestigious tournaments in the world, Rank isn’t compelled to turn golf into a full-time job.

“I have no regrets about not being professional,” he said. “I have no doubt I could be a great pro and could do well in the game of golf. But I love my job. I have one of the coolest jobs in the world. I know how the ups and downs of golf work and have seen a lot of great players not make it.

“When you get to play in tournaments like this and have success, I don’t know why you would want to chase being a professional golfer.”