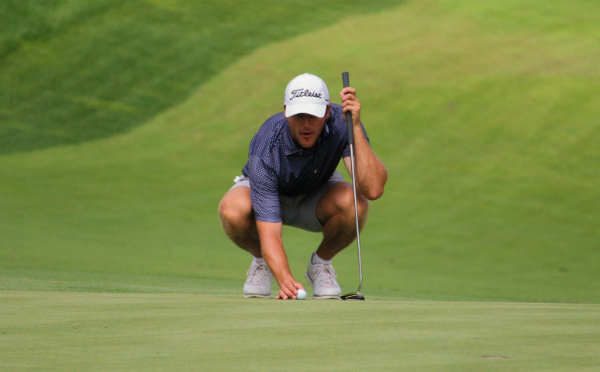 RICHMOND HILL, Ont. – Garrett Rank increased his lead by shooting a 1-under-par 70 in the second round of the 33rd Canadian Men’s Mid-Amateur Championship held at Summit Golf Club.

Rank entered Wednesday with a one-stroke lead and made three birdies and two bogeys in the second round to move to 6 under for the tournament. His advantage over the field is now two strokes after 36 holes.

“It was kind of tricky with the wind, and the greens were definitely a lot firmer than they were yesterday afternoon,” said Rank. “I’m not happy with my back-nine. I probably gave away four shots, which makes lunch taste a little worse, but it’s a long week and we’re only halfway through.”

Rank’s round got off to an ideal start. Teeing off on the par-3 No. 10, his tee shot carried over the green. The 31-year-old then chipped in for birdie from 30 feet while standing on a steep incline.

“I hit a really good shot off the tee, just with the wrong club,” added Rank. “I was in a bit of a pickle there and hit a great chip. I was lucky for it to go in. It was a nice start after kind of a bad decision off the tee.”

Sitting in second place and two strokes back of Rank is Charles Fitzsimmons of London, Ont. Fitzsimmons ascended the leaderboard with a round of 4 under 67, the lowest score of the second round. He made an eagle on the par-5 No. 14 and recorded two birdies to move into second.

“I just hit the ball really, really well,” said Fitzsimmons. “All of my shots were on point. I got a couple of putts to drop at key points to keep things going, but I really was just hitting it well all day.”

Fitzsimmons is the reigning Canadian University/College men’s individual champion and finished runner-up at the 2019 Ontario Men’s Amateur Championship. The 32-year-old has finished in the top-five of each of the past two Canadian Men’s Mid-Amateurs.

“I hit my approach shot a little to the right and just got a really good bounce off the front slope,” said Fitzsimmons when asked about his eagle. “It rolled up to 30 feet below the pin – it’s tough to get it there. I had a really nice look at it and just put it right in the jar.”

Defending champion Joseph Deraney of Beldon, Miss., carded 2 under on Wednesday. He now sits alone in third place at 3 under for the tournament.

Ryan Sevigny of Ottawa began the second round a stroke behind Rank, but carded a round of 3 over to move into fourth-place at 1 under, overall.

Mike Aizawa of Richmond, B.C., and Philip Arci of Vaughan, Ont., round out the top-five at 1 over.

Ryan Kings of Kitchener, Ont., Derek Meinhart of Mattoon, Ill., and Ashley Chinner of Brooklin, Ont., lead the 40-and-over Mid-Master division. All three sit at 3 over par for the tournament, nine shots behind Rank in the Mid-Amateur division.

Team Ontario continued their tradition of dominance in the inter-provincial competition. The trio of Fitzsimmons, Arci and Simon McInnis of Toronto, combined to finish the 36-hole competition at 3 under par, 12 strokes ahead of runners-up Team Québec.

It’s Ontario’s fifth straight year winning the R. Bruce Forbes Trophy. It is also the province’s 15th win all-time in the inter-provincial team competition, the most since the division was established in 1992.

A total of 72 players who finished 12-over-par or better have advanced to the final two rounds. The third round is scheduled to start at 7:30 a.m. local time on Thursday.